The owner of Midnight Cards, Randy Butterfield (Crown Deck: Luxury Edition, Ornate Playing Cards, Draconian Playing Cards, etc.) is a big fan of bowling. He decided to devote his new custom playing cards, Midnight BOWL-A-RAMA Decks, to this sport. There will be two decks of Midnight BOWL-A-RAMA: Red and Black. Court cards, backs and number cards will be different in both decks. Clothes of courts have different names of different bowling teams. All names will be unique for each deck. One of the most creative parts of these decks will be number cards. They feature pin bowling variations.

The decks are planned to be printed by the Legends Playing Card Company (LPCC).

Randy tried to design tuck cases with a cool retro vibe. The Bowl-A-Rama Logo design is inspired by Bowling Alley Signs from the ’50s and ’60s. Randy added the “Midnight” moniker to the names of the decks with the purpose to illustrate that this is his most personal design yet. Also it’s a little nod to all of the big playing card companies that make decks for their X-brand “Casinos”. Randy tried to imitate pins flying away due to bowling ball’s impact in the bottom part of their fronts. But there is a strange detail – any king of bowling doesn’t involve eleven pins 😉

Both back designs from these decks also combine or demonstrate visualizations of the bowling ball’s encounter with seven or sixteen pins. The Ace of Spades continues the tradition with five pins. 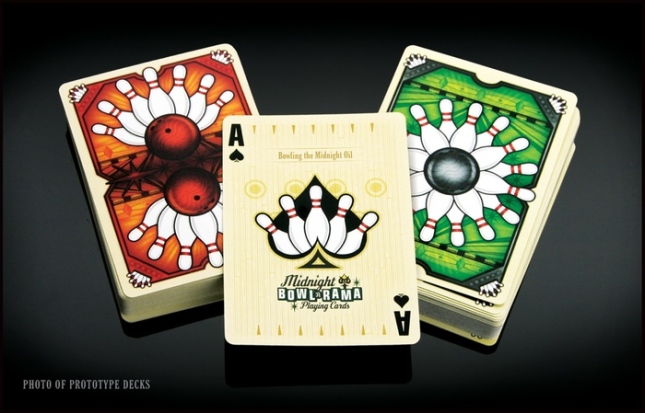 Bowling is one of the major forms of so-called throwing sports. In accordance with some records and artifacts, the earliest most primitive forms of bowling were known in Ancient Egypt and the Roman Empire. A German historian, William Pehle, asserted that bowling began in his country about 300 AD. There is also substantial evidence that Edward III, the King of England, allegedly outlawed some form of bowling to keep his troops focused on archery practice in England in 1366.

Different variations of bowling were imported to America by the English, Dutch and German settlers. One of the first mentions of bowling in American literature can be found in Rip Van Winkle, a short story by Washington Irving (an American writer) published in 1819. One autumn day, Rip Van Winkle encounters a man in antiquated Dutch clothing carrying a keg up the mountain. Together, they proceed to a hollow in which Rip discovers the source of thunderous noises: a group of ornately dressed, silent, bearded men who are playing nine-pins (type of bowling).

Bowling implies that a bowler (player) rolls or throws a bowling ball towards a target with the objective of scoring points in different ways. There are two main types of bowling: pin and target bowling. In pin bowling variations, the target is usually to knock over pins at the end of a lane. In target variations, the aim is usually to get the ball as close to a mark as possible. The pin version of bowling is often played on a flat wooden or other synthetic surface (can be oiled in different patterns for different techniques), whilst in target bowling, the surface may be grass, gravel or a synthetic surface.

The first standardized rules for pin bowling were established by the American Bowling Congress in New York City, on September 9, 1895. Midnight BOWL-A-RAMA Playing Cards are devoted to ten-pin bowling. It’s one of the most common types of pin bowling, so quite often it’s called just “bowling”, for example, in Canada, the United States (with the exception of New England), United Kingdom and Australia. In a ten-pin bowling competition, a bowler rolls a bowling ball down a lane with the objective of scoring points by knocking down as many pins among ten of them as possible.

The lane is 41.5-inch-wide (105 cm) and 60-foot-long (18 m). It’s bordered along its length by semi-cylindrical channels which should collect errant balls. These channels are commonly called “gutters”. There is a foul line at the end of the lane nearest to the bowler. If any part of a bowler’s body touches the line itself or beyond after the ball is delivered, it is called a foul and any pins knocked over by that delivery are scored as zero (0).

A game of ten-pin bowling consists of ten frames. Every bowler will take his frame in a predetermined order before the next frame begins. In each frame, the bowler will have two chances to knock down as many pins as possible with his bowling ball. If a bowler is able to knock down all ten pins with the first ball, he is awarded a strike (marked as “X”). If the bowler is able to knock down all 10 pins with the two balls of a frame, it is known as a spare. Bonus points are awarded for both of these, depending on what is scored in the next two balls (for a strike) or one ball (for a spare). If the bowler knocks down all 10 pins in the tenth frame, the bowler is allowed to throw three balls for that frame. This allows for a potential of 12 strikes in a single game, and a maximum score of 300 points (a “perfect game”). In general, one point is scored for each pin that is knocked over. The player with the most points at the end of ten frames wins. Although if time runs out before the end of ten frames bowling stops, and the person with the most points wins the game. 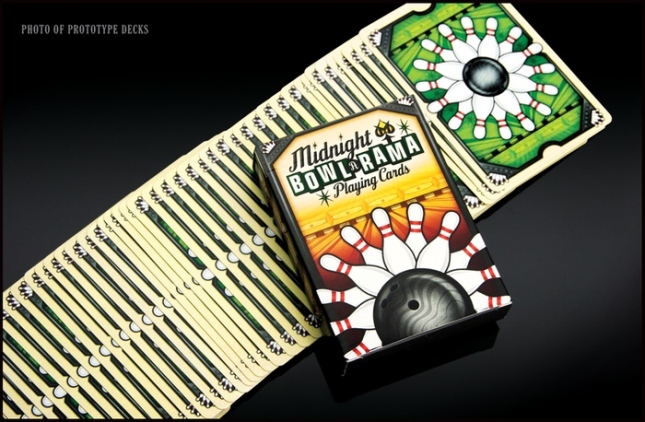 In the United States, pin specifications are set by the United States Bowling Congress (USBC). World Bowling (former World Tenpin Bowling Association) has adopted the USBC specifications. Pins must be 15 inches (381 mm) tall and about 4.7 inches (121 mm) wide at their widest point. The weight of a single pin must be at least 3 pounds, 6 ounces (1.47 kg) and no more than 3 pounds, 10 ounces (1.64 kg). Bowling pins are constructed by gluing blocks of rock maple wood into the approximate shape, and then turning on a lathe (a machine tool which rotates the work piece on its axis to perform various operations such as cutting, facing, knurling, and such to create an object which has symmetry about an axis of rotation). After the lathe shapes the pin, it is coated with a plastic material, painted, and covered with a glossy finish. Also bowling pins can be made from approved synthetics. 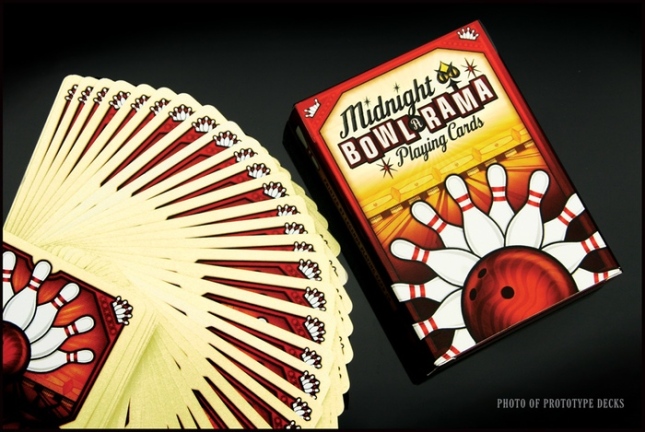 Like many types of sports, different variations of bowling are also leisure activities which involve the whole families.

“As a kid, I grew up Bowling on Leagues with my three brothers. It was a blast!…

After dabbling around with Playing Card designs for over three years now, I’ve worked on a lot of elegant, baroque and fancy designs. Last September I launched my first solo project, the Draconians. For my second solo project, I wanted to switch it up, go outside of the norm, and really have some FUN with the theme! Baroque swirls and little to no use of color are NOT allowed in this design!! The Midnight Bowl-A-Rama designs have been in-progress throughout most of 2014, for about two hours each night. I’m proud to finally let them loose and see what happens. Let the Pins fall where they may!” ~ Randy Butterfield

You could pledge here: http://kck.st/1BzF3yh

Posted by Collector on 02.04.2015 in Kickstarter, Legends Playing Card Company