“Fuego” translates from Spanish into English as “fire” or “passion”. This name reflects the nature of characters in these playing cards. Their whole appearance yells, “Memento Mori” (remember that you have to die) doesn’t mean “Forget about Joy of Life”. 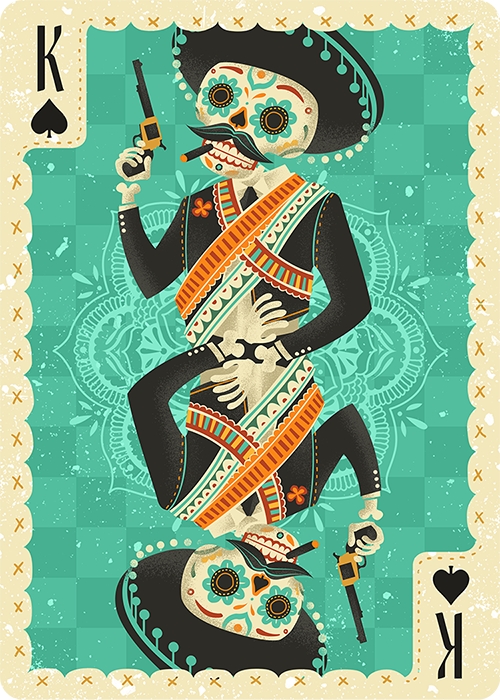 Day of the Dead is, first of all, a Mexican holiday. But it is acknowledged around the world in other cultures. The holiday focuses on gatherings of family and friends to pray for and remember friends and family members who have died, and help support their spiritual journey. Celebrations can take a humorous tone, as celebrants remember funny life moments about the departed.

One of the most famous admirers of joyful skeletons was above mentioned José Posada (1851–1913). He took appropriate humorous tone and used it for political and cultural critiques. His satirical skulls, calaveras, influenced many Latin American artists and cartoonists. As we can see, not only American artists are influenced by his approach.

Calaveras (skulls) as one of symbols of Dia de los Muertos became widely popular after Posada’s death, actually. Calaveras wasn’t only the name of skulls made from sugar or clay for the holiday. There were also literary calaveras – short poems written for the Day of the Dead. The poems mocked epitaphs of friends, described interesting habits and attitudes or funny anecdotes. This custom originated in the 18th or 19th century.

Literary calaveras became so popular that newspapers started to print them. Quite often it was some type of leaflets. It was natural to add illustrations to such texts. A lot of people were illiterate. So, pictures with short simple notes were more understandable for them. The general style and aesthetics of such illustrations were predetermined. But newspapers are newspapers. Important politicians and famous people quickly became heroes of such “illustrated calaveras”. They were depicted as skeletons exhibiting recognizable traits, making them easily identifiable. So, pictures of skulls also were named calaveras. As a rule, such calaveras had critical nature. These are some variety of caricatures. But unlike caricatures calaveras are tightly connected with Dia de los Muertos now.

Posada is one of the most famous creators of them. He met Antonio Vanegas Arroyo in Mexico City in 1889. That meeting played an important role in their lives. Vanegas had a publishing firm and produced inexpensive literature for the lower classes. In order to communicate with a largely illiterate public, Posada and Vanegas propagated news items on printed leaflets illustrated by Posada. The illustrations were meant to satirize the life of the upper classes during the reign of Porfirio Díaz (a Mexican soldier and politician, who served seven terms as President of Mexico, totaling three and a half decades between 1876 and 1911).

Now we know that there will be two decks of these playing cards: Fuego Playing Cards and Fuego Luna Playing Cards. Fuego Oro Viejo Playing Card Deck is a stretch goal. Fuego Luna Deck is a dark reflection of Fuego Deck. But dark colours haven’t affected joyful mood of the characters.

You could pledge here: http://kck.st/1Ed8cgZ