Sevens of this deck are solely represented by Captain Falcon. He is a character from the F-Zero series (futuristic racing video games created by Nintendo). Captain Falcon is a racer and a secret bounty hunter. He appears as a secret character in the original Super Smash Bros.

One important detail! Eights and Nines are special in Bitf Deck. The same pictures are only for the same colours of suits in case of these cards.

The Eight of Hearts and the Eight of Diamonds glorify Mario… Super Mario… “Shaken not stirred”. Mario is a character in the Mario video game franchise. He was created by Nintendo’s Japanese video game designer, Shigeru Miyamoto, and became the company’s mascot and the eponymous protagonist of the series (his main weaposnares his quick legs and high jumps). Depicted as a short, pudgy, Italian plumber who resides in the Mushroom Kingdom, his adventures generally center upon rescuing Princess Peach from the Koopa villain.

“…Mario’s luxurious mustache and round belly are world-famous, and he knows it. Mario’s always willing to lend a hand, especially when no one wants him to. Although he has a tendency to steal the spotlight, at least his heart’s in the right place…” ~ Matthew Taranto

The Eight of Spades and the Eight of Clubs are occupied by Luigi, Mario’s younger, taller, thinner twin brother. He has helped and fought alongside his brother on many occasions. Throughout his life, he has lived in Mario’s shadow, developing both cowardly and heroic tendencies.

“…Living in Mario’s shadow seems to have given Luigi a bit of an inferiority complex. Mario’s reputation as a high-jumping hero marginalizes Luigi’s own qualities, even though Luigi is technically an even better jumper than his portly bro. The only things that spice up his otherwise lonely life are his secret love for Daisy…” ~ Matthew Taranto 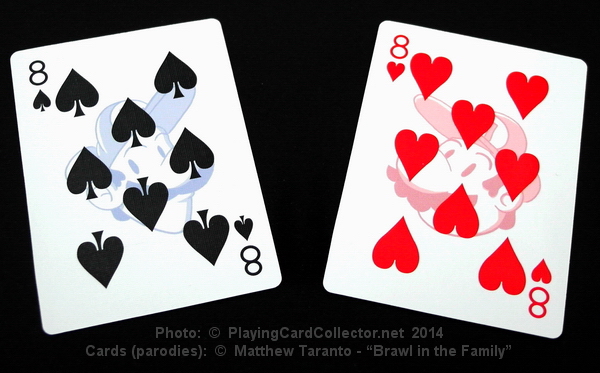 The Nine of Hearts and the Nine of Diamonds are beautified with a face of a young pretty girl.

The Nine of Spades and the Nine of Clubs are represented by Mega Man. He is a robot created by Dr. Light and the titular protagonist of the Mega Man video game series. In the Mario series, Mega Man has only made appearances in the Club Nintendo comics, and is set to be a playable third-party guest character in Super Smash Bros. for Nintendo 3DS / Wii U.

“…The Little Robot That Could rises from a tumultuous past to fight for everlasting peace once again, and he’s ready to party like it’s 199X…” ~ Matthew Taranto 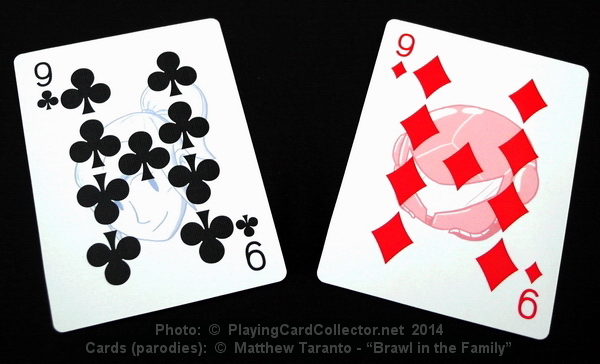 The protagonist of Bitf’s Jacks is Meta Knight. He is a recurring anti-hero character in the Kirby series. Meta Knight always wears a metal mask, and usually appears as an antagonist or a boss Kirby must fight, but on occasions has had to team up with him. He made a crossover debut into the Mario series as a fighter in the game Super Smash Bros. Brawl.

“The seldom-seen masked character is the only creature Kirby is actually afraid of. Considering Meta Knight is chock full of armor, wields a sword, and looks none too tasty, that’s not much of a surprise… Although he feels that Kirby is a pest, Meta Knight doesn’t seem to have any sort of alliance with Dedede. Some of his recent behavior may have been slightly surprising to those who know him…” ~ Matthew Taranto

All four Jack cards depict his feats of arms. The Jack of Clubs card tells us how he fights Dark Matter (an intergalactic race, representatives of which can possess other beings, putting them under their control, and are major antagonists in the Kirby series). The Jack of Spades card shows Meta Knight’s confrontation with Zero (a giant white creature with a Kirby-sized red eye, which leads the Dark Matter, and is a force of negative energy). He defends from Marx (the antagonist and final boss from Milky Way Wishes in Kirby Super Star and its remake; a round, lavender creature, similar to Kirby, but having no arms, wearing a jester hat, a bow tie, and brown shoes) on the Jack of Hearts card. Also he threatens Nightmare, also known as Nightmare Wizard (the primary antagonist and the final boss of Kirby’s Adventure game and its remake, Kirby: Nightmare in Dream Land), with his sword on the Jack of Diamonds card. 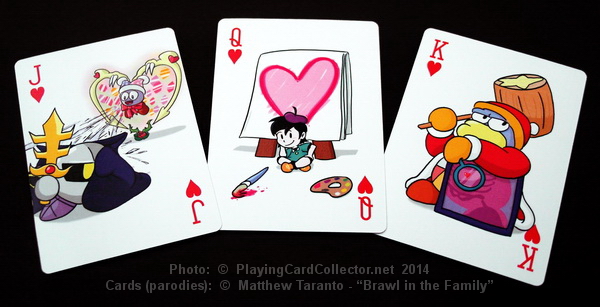 You can find Adeleine on all Queens from this “Brawl in the Family” deck. She is the artist who has the ability to make her paintings real, either creating monsters while under the control of Dark Matter or providing Kirby with help. In Kirby 64: The Crystal Shards game, Adeleine appeared as one of the early boss characters taken over by Dark Matter. She joins with Kirby after he frees her.

“Every webcomic needs a hot chick, but Kirby will have to settle for Adeleine… Her gentle nature and happy demeanor make her one of Kirby’s kindest and closest friends. Adeleine is one of the few characters who generally likes Dedede. This may be because she possesses a childlike optimism that makes her rather fearless.” ~ Matthew Taranto 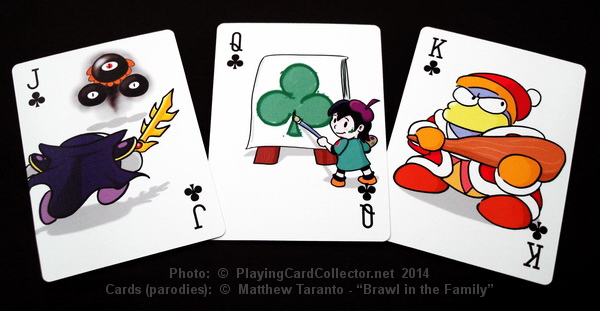 The creature on the King of Spades card, served by Waddle Dees, is King Dedede. This large penguin is the monarch of Dream Land, carrying a large wooden mallet and is known to be self-centered. Dedede causes many problems for the inhabitants of Dream Land through selfish mischief. But he isn’t truly evil and does care for Dream King Land. King Dedede is the primary villain of the Kirby series and the archenemy of Kirby, though he is sometimes an anti-hero.

“No longer needin’ a monstah to clobbah dat dere Kirbeh, King Dedede has decided to take matters into his own hands. Despite sharing more than a few traits with Kirby, a fact which Dedede would never admit, the self-proclaimed King wants nothing more than to get Kirby. He often tries to rope Meta Knight into his schemes, but this rarely proves successful, as Meta Knight typically has better things to do. Either way, Dedede persistently plugs away, even if Kirby is usually oblivious to their supposed “rivalry.” ~ Matthew Taranto 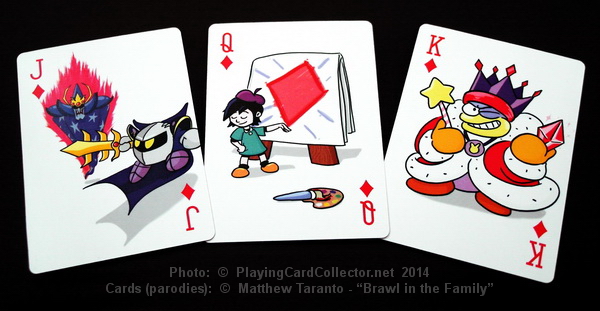 Jokers are represented by Waluigi. He is Luigi’s very tall and skinny rival, and Wario’s (an obese, muscular, hot-tempered, and greedy man – a recurring character in the Mario series) partner. Waluigi made his debut in Mario Tennis. Waluigi has evidently been antagonizing the Mario Bros. Also he has made playable appearances in many of the Mario series’ spin-off titles. His name is a portmanteau of the Japanese words, Warui and Ruīji, meaning “bad” and “Luigi”.

“Hide your daughters and your modern art: Waluigi’s in town!

Waluigi is a poorly-understood individual who has difficulty fitting in with others. His only friend in the world (aside from Wario) seems to be Daisy, who has more patience and compassion than even Waluigi is capable of wasting… Waluigi dislikes many things, but he especially dislikes Luigi, musicals, and Brawl in the Family. He enjoys dancing by himself and relaxing in massage chairs.” ~ Matthew Taranto

Simple one way backs demonstrate four pips and the logo of the “Brawl in the Family” comic strip.