Successful creators of Bicycle Dia de Los Muertos playing card project on Kickstarter developed a new series of decks – The Grimoire Playing Cards. They propose the first two decks from the series (Illustrated by David Edgerly): Necromancy Deck and Elemental Magick Deck. The decks are based on ancient texts of magick, magical aesthetics of fantasy worlds and role-playing games (RPG). Court cards portray the creatures summoned and controlled by Necromancers and Elemental sorcerers – various types of undead, and spirits of earth, air, water and fire.

The decks are planned to be printed by the Expert Playing Card Company (EPCC). Poker size. 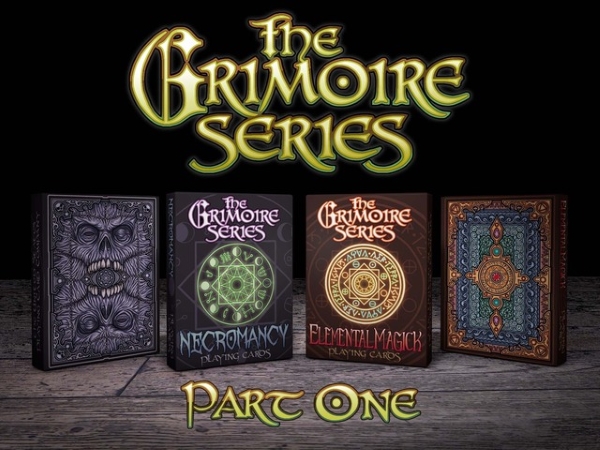 “These decks recall the times we spent as kids in the world of fantasy role-playing games, or RPG’s, where the knowledge of powerful sorcerers was contained in ancient texts, or Grimoires.” ~ Edgy Brothers

The main deck for this project is Necromancy playing cards. Elemental Magick deck is a stretch goal for this Kickstarter playing card project. Edgy Brothers plans for this to be the first in a three part series, totaling six decks in all.

The word “necromancy” is adapted from Late Latin necromantia. This is a form of magic involving communication with the deceased (by summoning their spirit as an apparition or raising them bodily) for the purpose of divination, imparting the means to foretell future events or discover hidden knowledge, or to use the deceased as a weapon.

The Necromancy deck from this series will have such characters as court cards:

There are also symbols of Moon phases around the octagram. Unfortunately, they are incorrect. But Edgy Brothers has a chance to correct this issue. 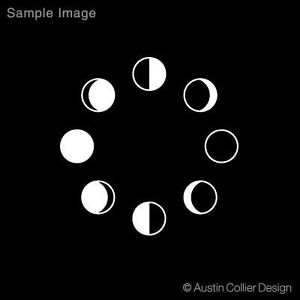 And there is no information about symbols located between different Moon phases. Maybe these are artistic symbols of eight planets: Earth, Jupiter, Mars, Mercury, Neptune, Saturn, Uranus and Venus.

The back side of Necromancy tuck case shows the back design of the playing cards. 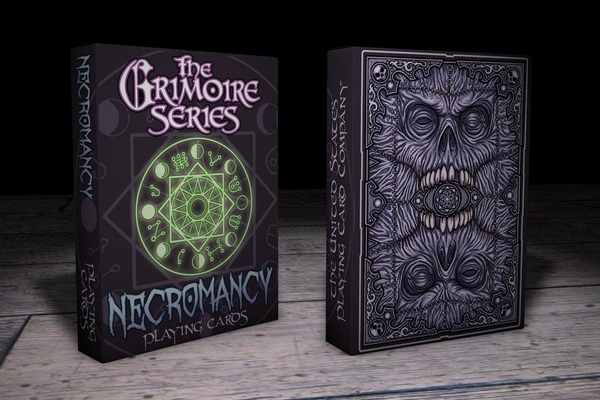 An elemental is a mythic being in the alchemical works of Paracelsus (a Swiss German Renaissance physician, botanist, alchemist, astrologer and general occultist) in the 16th century. There are four elemental categories: gnomes (spirits of earth), undines (spirits of water), sylphs (spirits of air) and salamanders (spirits of fire). These correspond to the Classical elements of antiquity: Earth, Water, Air and Fire.

Magick is a term used to differentiate the occult from stage magic.

The Elemental Magick deck from this series will have such characters as court cards:

The front of Elemental Magick tuck case has also a regular octagram and an eight-sided star polygon fitted to it. It also has Latin names of four elements fitted into the circle located around the octagram. They are: Ignis (Fire), Aqua (Water), Aer (Air), Terra (Earth). The “s” letter in Ignis looks more like the “t” letter, by the way 🙂

The octagram is also surrounded with different small circles. They are not simple embellishments. The individual elements of Air, Fire, Water and Earth are each represented by an appropriate circle in accordance with the Native American traditions. Nice way to say “We are American designers, remember that”.

Latin names of elements and their circle symbols have different colours to underline their meaning.

The back side of Elemental Magick tuck case shows the back design of the playing cards. 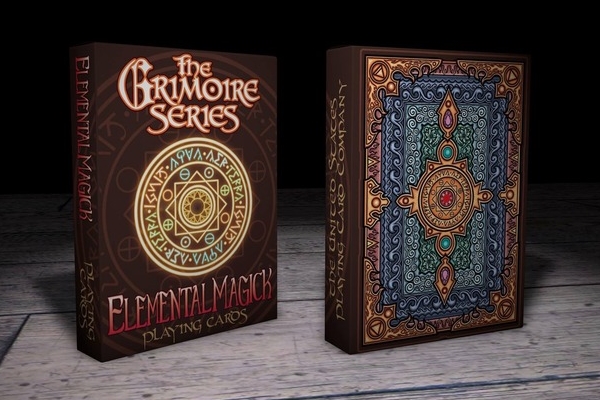 You could pledge here: http://kck.st/1vW99eW

The Ace of Spades from Necromancy deck aesthetically reminds us about the Necronomicon (initially, a fictional grimoire invented by horror writer H. P. Lovecraft) from Evil Dead 3: Army of Darkness. The book was made with skin from dead faces.

There is the Latin inscription around the main pip “MORS SOLUM INITIUM EST“. It translates into English as “Death is only the beginning”.

The Grimoire Series Necromancy Playing Cards: The Ace of Spades 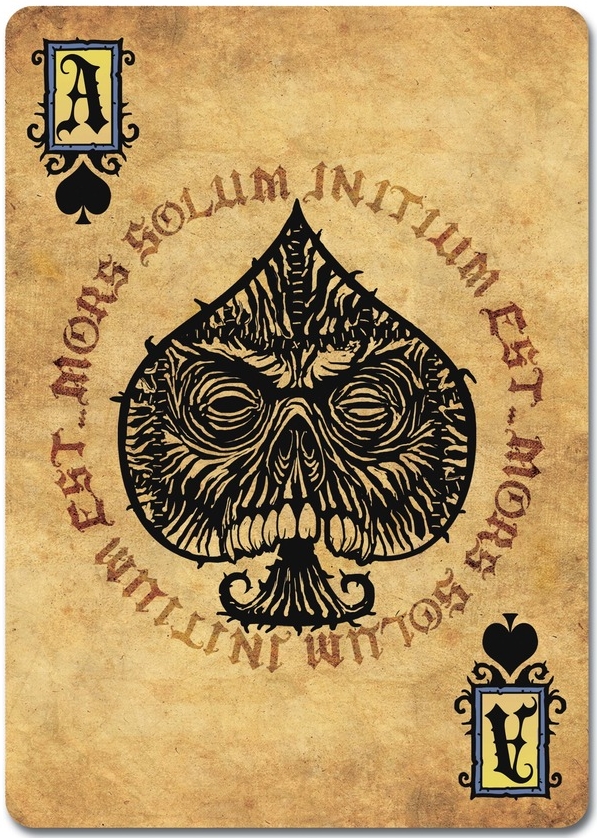 Lich is represented on the King of Spades. He is a type of undead creature found in the Dungeons & Dragons role-playing game or in fantasy fiction. Liches are depicted as being clearly cadaverous, bodies desiccated or completely skeletal. They are spell casters who seek to defy death by magical means. The Lich’s name is hidden on the card under lightnings between small triangles.

The Grimoire Series Necromancy Playing Cards: The King of Spades 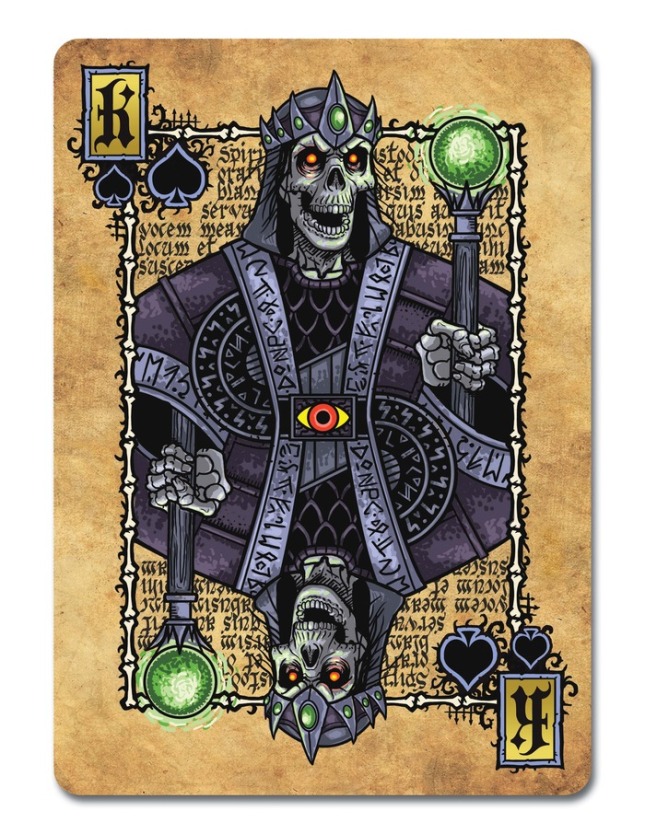 Banshee is the Queen of Clubs in Necromancy deck. She is a female spirit in Irish mythology, usually seen as an omen of death and a messenger from the underworld. In legend, a banshee wails nearby when someone is about to die. If you are not sure that the Queen of Clubs is Banshee you can find appropriate evidence under her mantelet.

The Grimoire Series Necromancy Playing Cards: The Queen of Clubs 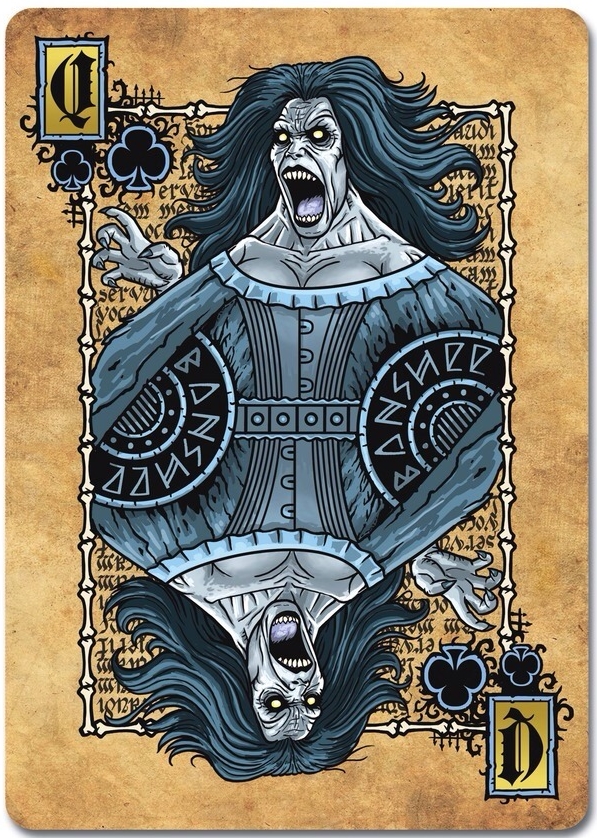 The Queen of Hearts is the Wraith. Wraith is a Scottish dialectal word for ghost or spirit. It came to be used in Scottish Romanticist literature. Also the wraith is an undead creature in the Dungeons & Dragons fantasy role-playing game. It was one of the first monsters introduced in the earliest edition of the game (1974).

The name of this creature is cut out somewhere near the hands. That must be very painful… For someone… But not for this powerful IMMORTUI (freely translates from Latin as zombie). Do you have any doubts? Look at its mighty shoulders 😉

The Grimoire Series Necromancy Playing Cards: The Queen of Hearts 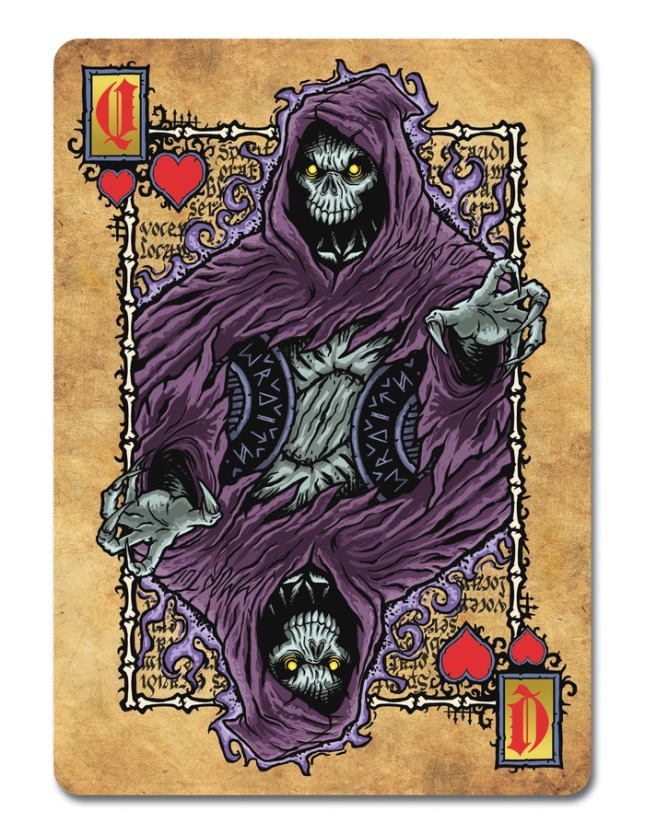 The Jack of Clubs is represented by the Mummy. The mummy was included in earliest Dungeons and Dragons boxed games as well as the original Monster Manual written by Gary Gygax and published in 1977. It is an undead creature whose corpse has been mummified and animated, often through the power of an evil god of the Egyptian pantheon such as Set.

Pay attention to flounces of its clothes and you will find several inscriptions. I don’t know what “MEUM” should mean. Hourglasses are symbols of death in some cultures and pop cultures.

The Grimoire Series Necromancy Playing Cards: The Jack of Clubs 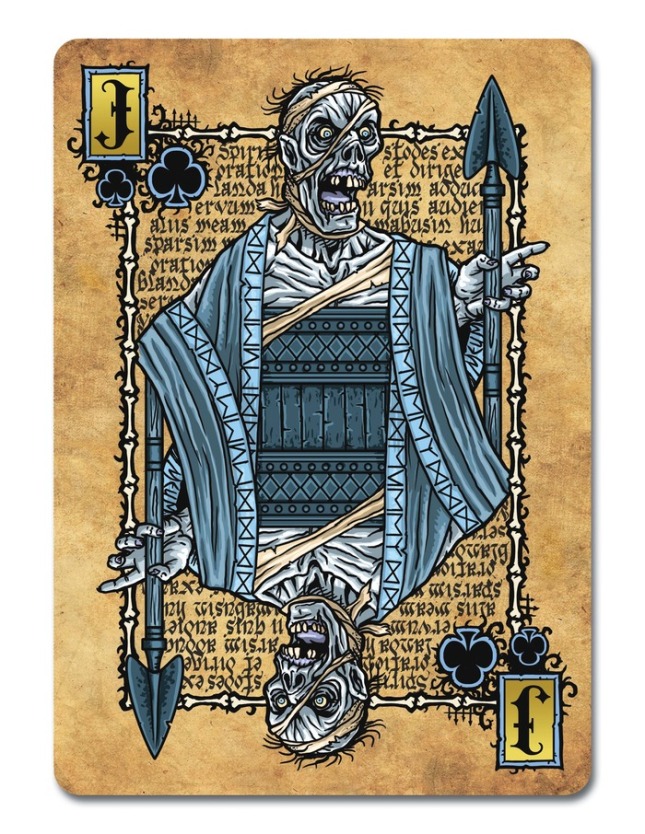 Ghoul is depicted on the Jack of Diamonds. He is a folkloric monster or evil spirit associated with graveyards and consuming human flesh, often classified as undead. This one is a real dandy as he prefers branded things… bones.

The Grimoire Series Necromancy Playing Cards: The Jack of Diamonds 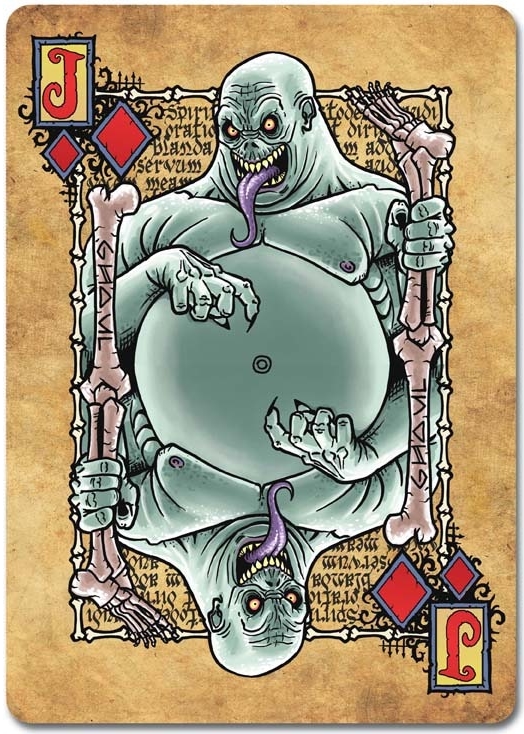 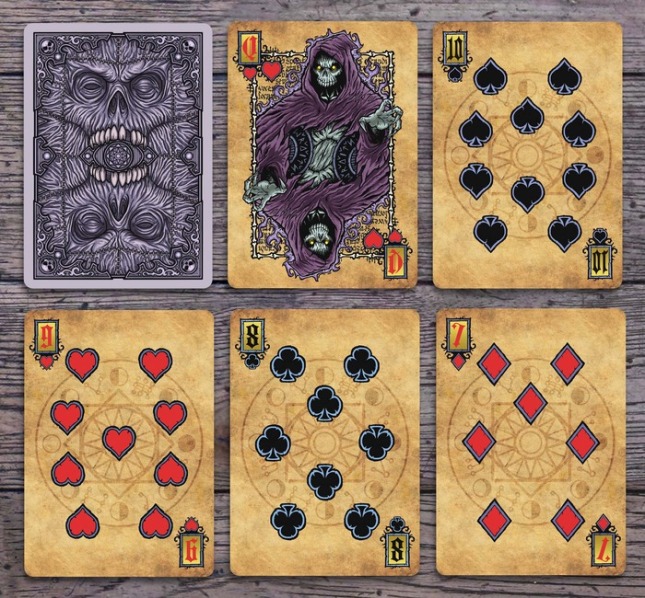 The back design of Necromancy playing cards continues to represent aesthetics of above mentioned Necronomicon with the regular octagram and the eight-sided star polygon from their tuck case in the central part of it. These last two elements, in combination with other details from the back, form some resemblance of an eye. Maybe this is the Eye of Death from Dark Souls (an action role-playing video game developed and published by From Software in Japan and by Namco Bandai Games internationally). 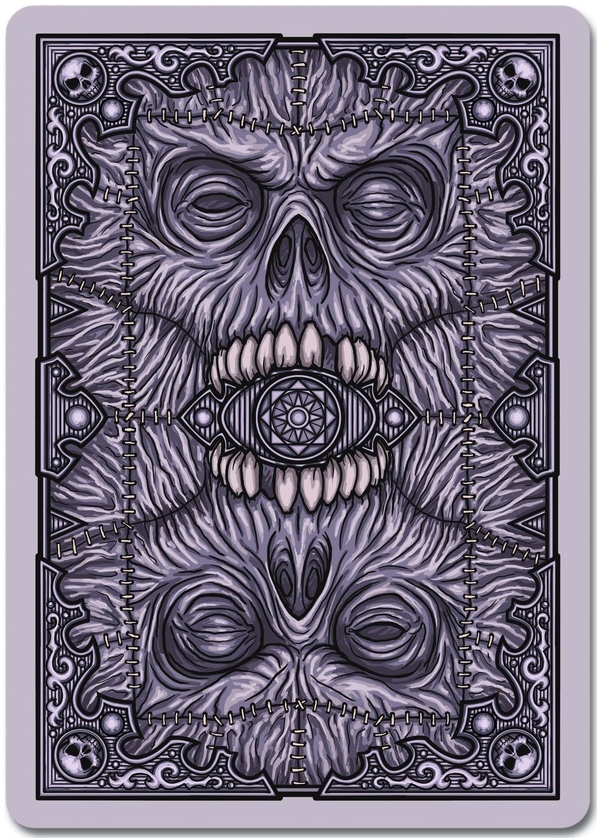 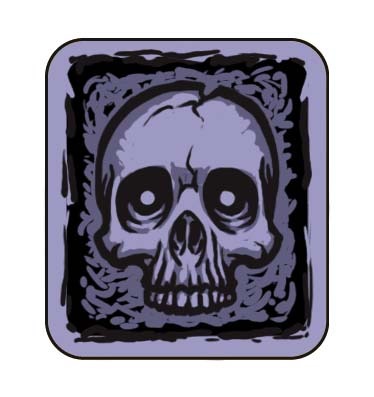 The back design of Elemental Magick deck reflects its essence. Like in the case of Necromancy deck, its metallic elements (embellishments) imitate corners and edges of ancient magic book covers. These elements weren’t used only for protection of leather book covers. Different metallic elements and stones were also used to ornament front parts of the covers. You can find such ornament in the center of the Elemental Magick’s back design as well.

The design itself has four “circles” (of rectangular shape :)) dedicated to four elements. The first “circle” (closest to the edges) depicts flames and symbolizes fire. Flames of fire are also added to the above mentioned metallic embellishments in the corners. Eight triangles (symbols of fire) are added to the middle parts of right and left edges of the back.

Four traditional medieval alchemic symbols of elements are nicely incorporated into the corners of the back design. Edgy Brothers applied their artistic vision to them and slightly changed the symbols. Nevertheless, you can twirl the back as you like and you’ll always have the four symbols on it. 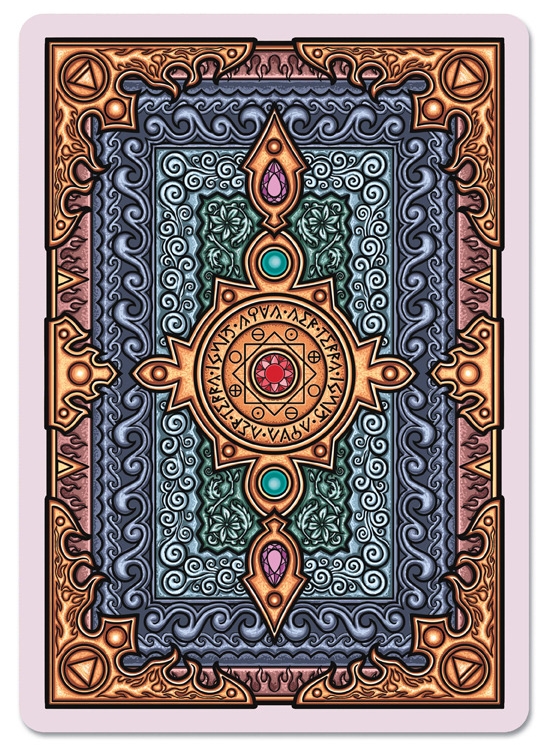 Our ancestry from all over the world liked symbolism. So, we have a lot of objects symbolizing different things, natural phenomenon, elements, etc. Stones also symbolize elements. Edgy Brothers decided to use that.

Ruby symbolizes fire. It is in the very center of the Elemental Magick’s back design. Two Turquoises (stones that are closest to the ruby) symbolize Earth. Two Amethysts symbolize air. Unfortunately, there are no stones symbolizing water. On the other hand there are places on the back design to add such stones. Maybe Edgy Brothers will improve the design. 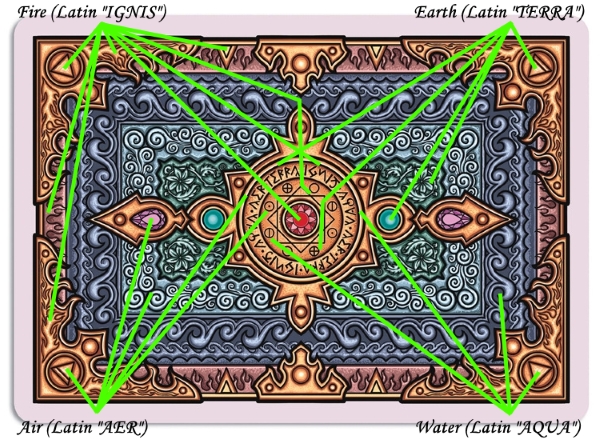 Each court card of Elemental Magick deck has the hidden name of its character as in Necromancy deck. Some of them have additional hidden symbols.

Djinn (Jinn) are supernatural creatures in Islamic mythology as well as pre-Islamic Arabian mythology. The Quran says that jinn are made of a smokeless and “scorching fire”. They are physical in nature, being able to interfere physically with people and objects. Like human beings, Djiin can be good, evil, or neutrally benevolent and hence have free will like humans. 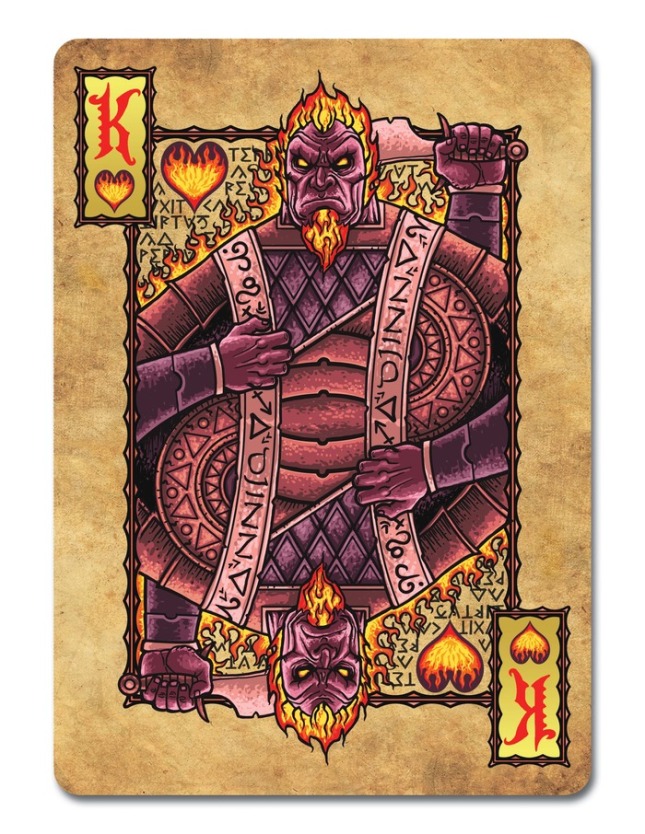 Undine is depicted on The Queen of Spades. Undine is water elemental in the alchemical works of Paracelsus. She has a blue lotus (water-lily) in her hand. Men will find some cockle shells in a moment. Ladies will find more of them in her strange ichthyoid hand and on her neck. But will you find her name, two huge cockle shells and two sea-urchins? 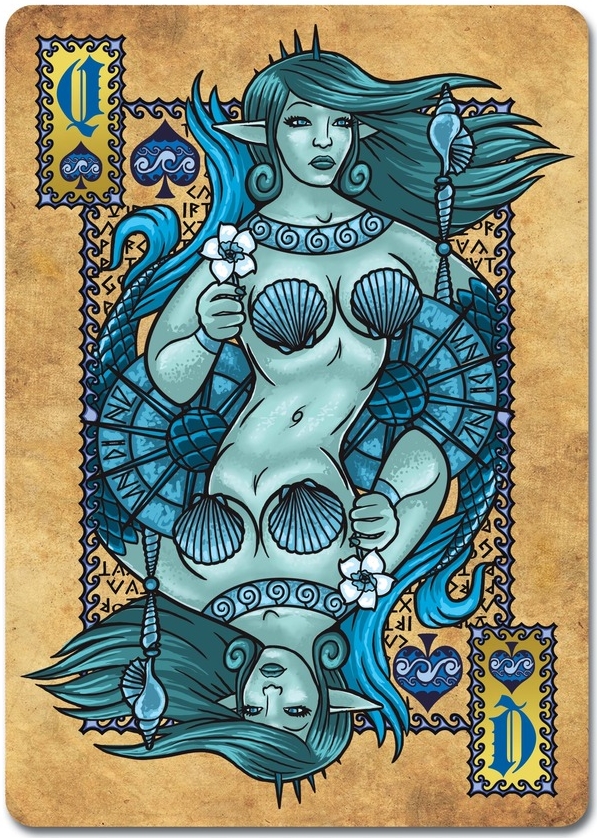 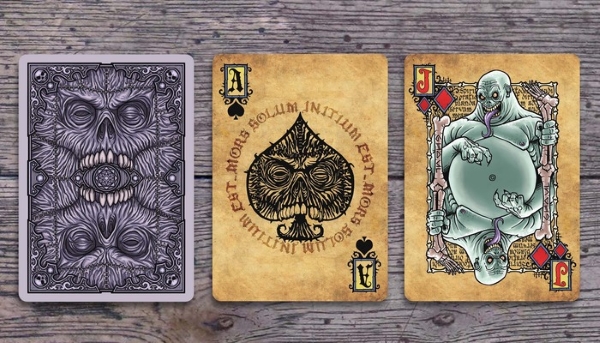 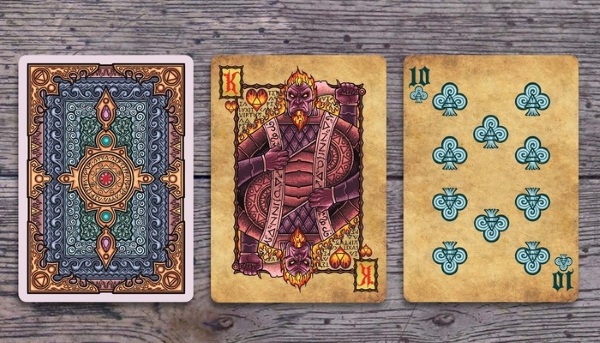