These are playing card artworks designed by an American artist, Vivian Hansen. She devoted them to Irish legends and appropriate heroes. The cards feature Cú Chulainn, Queen Méadhbh, Fionn mac Cumhaill, and Áengus. Each character has a story involving some animal. Appropriate animals have been paired with appropriate characters. The stylization is based on the Book of Kells and other illustrated manuscripts featuring Irish myths. Unfortunately, all courts are the same for different suits.

The artist is open for propositions to produce the deck. 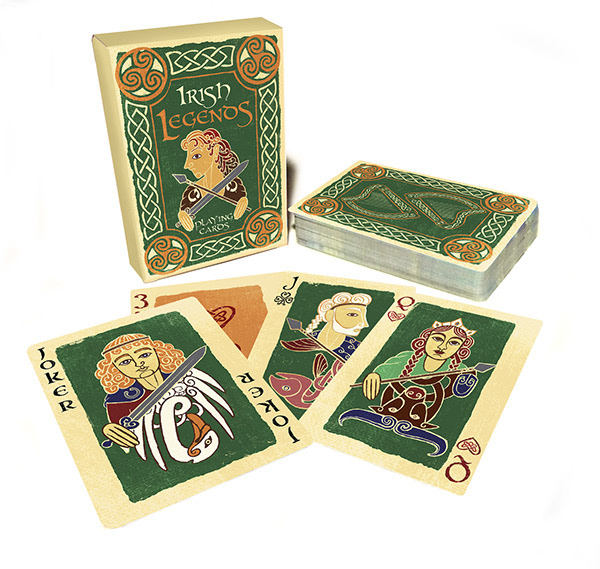 The King of Spades – Cú Chulainn. He is an Irish mythological hero, the son of the god Lugh and Deichtine. Cú Chulainn appears in the stories of the Ulster Cycle (the second cycle of Irish mythology), as well as in Scottish (Celtic mythology) and Manx (myths of the Isle of Man located in the Irish Sea between the islands of Great Britain and Ireland) folklore. This hero is known for his terrifying battle frenzy, or ríastrad, in which he becomes an unrecognisable monster who knows neither friend nor foe. He gained the name as a child, after killing Culann’s fierce guard-dog in self-defence and offered to take its place until a replacement could be reared.

The Queen of Hearts – Queen Méadhbh. She is the queen of Connacht in the Ulster Cycle. She had a lot of husbands and even more lovers. One of her husbands was Ailill mac Máta. The queen wanted to be equal in wealth with the husband. But she found out that Ailill was one powerful stud bull richer than her. The only rival to Ailill’s bull, Finnbennach, was Donn Cúailnge, owned by Dáire mac Fiachna (an Ulster cattle-lord and a vassal of Conchobar’s). She sent messengers to Dáire with offers of land and treasure, and sexual favours, if he would loan the bull to her for a year. Dáire agreed. But one of the messengers got drunk, and declared that his queen could get the bull even without Dáire’s consent. That offended the man and he withdrew his consent. Queen Méadhbh started a war against him. The invasion was opposed only by the teenage Ulster hero Cú Chulainn. The queen was able to get the bull by force for some time. But after a final battle against Conchobar’s assembled army, she was forced to retreat. Donn Cúailnge had a fight with Finnbennach. The bull fought Ailill’s bull, but got a lot of wounds and died.

The Jack of Clubs – Fionn mac Cumhaill. He is a mythical hunter-warrior form the Fenian Cycle (the third cycle) of Irish mythology, occurring also in Scottish and Manx folklore. In accordance with one of legends, the young Fionn met the druid and poet Finnegas near the River Boyne and studied under him. Finnegas had spent seven years trying to catch the Salmon of Knowledge, which lived in a pool on the Boyne. It was a magic fish. Whoever ate that salmon would gain all the knowledge in the world. Eventually Finnegas caught it, and told the boy to cook it for him. While cooking it Fionn burned his thumb, and instinctively put his thumb in his mouth. This imbued him with the salmon’s wisdom, and when Finnegas saw that he had gained wisdom, he gave young Fionn the whole salmon to eat.

Joker – Áengus. Áengus is an Irish deity. He is a member of the Tuatha Dé Danann (a race of supernaturally-gifted people in Irish mythology) and probably a god of love, youth and poetic inspiration.  He is a hero in the Mythological Cycle (the first cycle of Irish mythology). Aislinge Óenguso (the Dream of Aengus) says that Aengus fell in love with a girl he had seen in his dreams. His parents, the Dagda (a father-god and a protector of the tribe) and Boann (goddess of the River Boyne), tried to find her for him. But they weren’t successful in their searches. So, Áengus asked his brother, King Bodb Derg of Munster, to help him. King Bodb found the girl, Caer Ibormeith. But she happened to be an unusual girl. Every alternate Samhain (a Gaelic festival marking the end of the harvest season and the beginning of winter) she had to turn into a swan, in which form she had to remain for a year before becoming human again the following Samhain. Áengus was allowed to marry her under specific condition. He had to pick her out, in swan form, from a group of one hundred and fifty other swans at Loch Bel Dragon (the Lake of the Dragon’s Mouth). In accordance with the legend, Áengus turned himself into a swan and they flew away, singing beautiful music that put all listeners asleep for three days and nights. 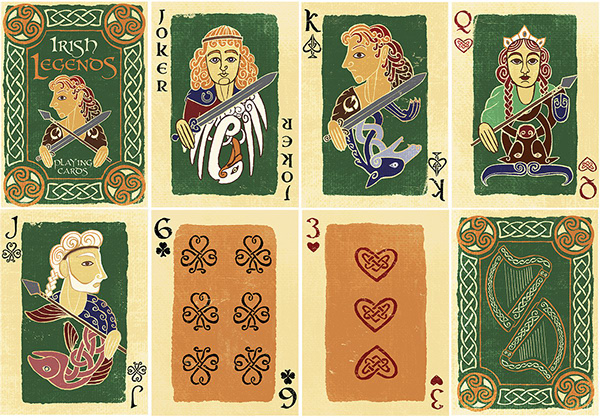 It’s a pity that not all four cycles of Irish mythology are covered, and the fourth one, the Historical Cycle, is omitted.