“Go, sit upon the lofty hill,
And turn your eyes around,
Where waving woods and waters wild
Do hymn an autumn sound…”
~ Elizabeth Barrett Browning*, “The Autumn” (1833)

Autumn shines with orange Clubs. Clubs courts are bright and gorgeous, especially the Queen of Clubs. She clearly understands that her dress is really brilliant and unique despite its fading nature. Odium between the Queen of Diamonds and the Queen of Hearts due to similar green tints in their dresses doesn’t bother her. And, in accordance with her strong believe, the dress definitely isn’t a dull one in contrast to the dress of the Queen of Spades. But she is quite careless. Unlike her worried relatives, she doesn’t want to think about their upcoming defeat in the unavoidable battle with the House of Winter Spades. Maybe the Queen of Clubs realizes that the House of Autumn Clubs will bring back its reign the next year.

The beautiful mixture of orange, brown, red and green tints is splashed out in these cards. The Clubs pip resembles the Diamonds pip, but in orange. It’s presumably composed with fading parts of some plants.

The Four Seasons Playing Cards: The Queen of Clubs 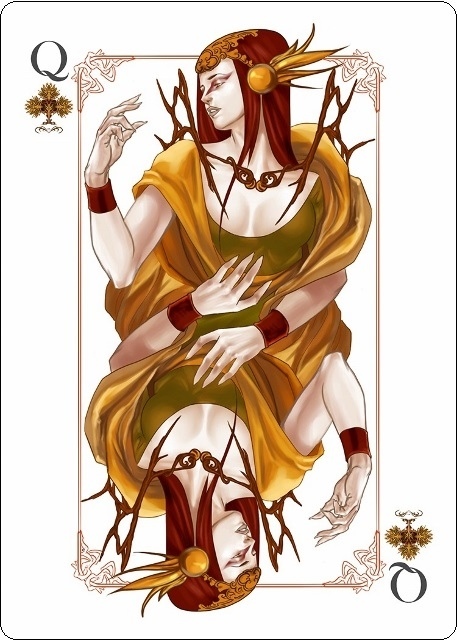 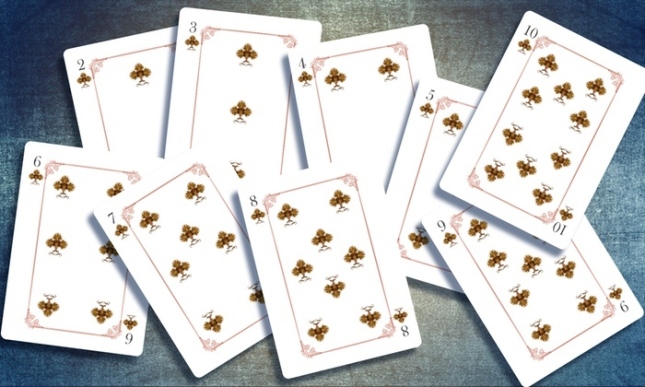 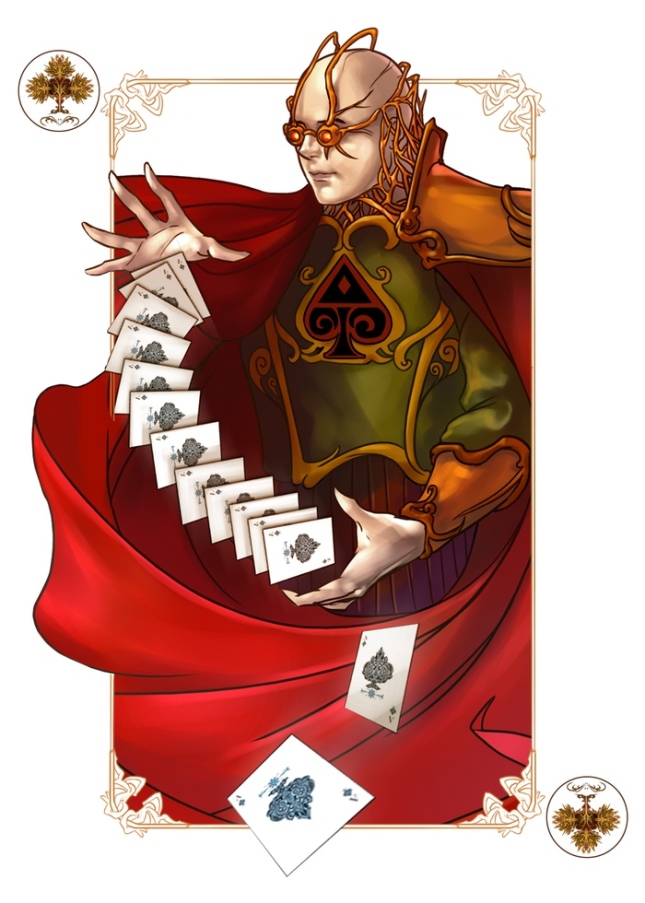 Winter is imprisoned in frozen Spades. Spades courts are cold and gloomy. Different tints of blue prevail. The Spades pip imitates frosty patterns on ice-covered windows. A small fragile snowflake under the pip has to “warm“ our perception of the winter’s severity.

It might seem for a moment that Spades courts suffer from lack of warm in their hearts, especially the Queen of Spades. Don’t be gullible and remember about Kai‘s incident in The Snow Queen by Hans Christian Andersen (a fairy tale written by the Danish author).

The Four Seasons Playing Cards: The Jack of Spades 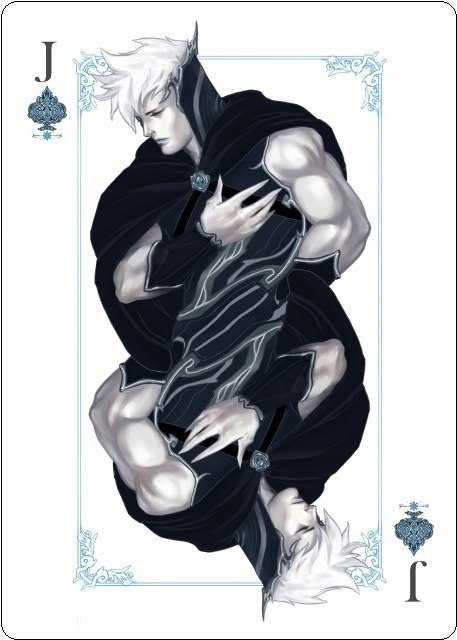 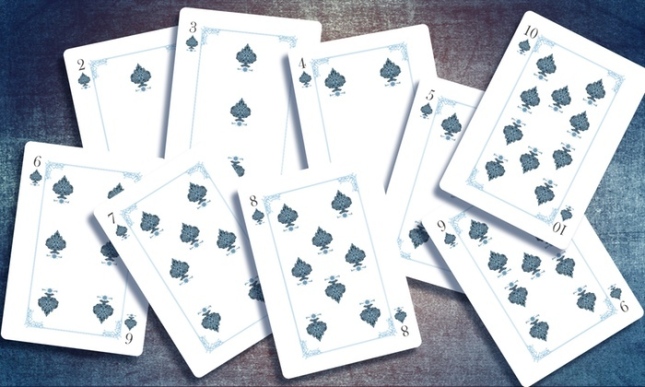 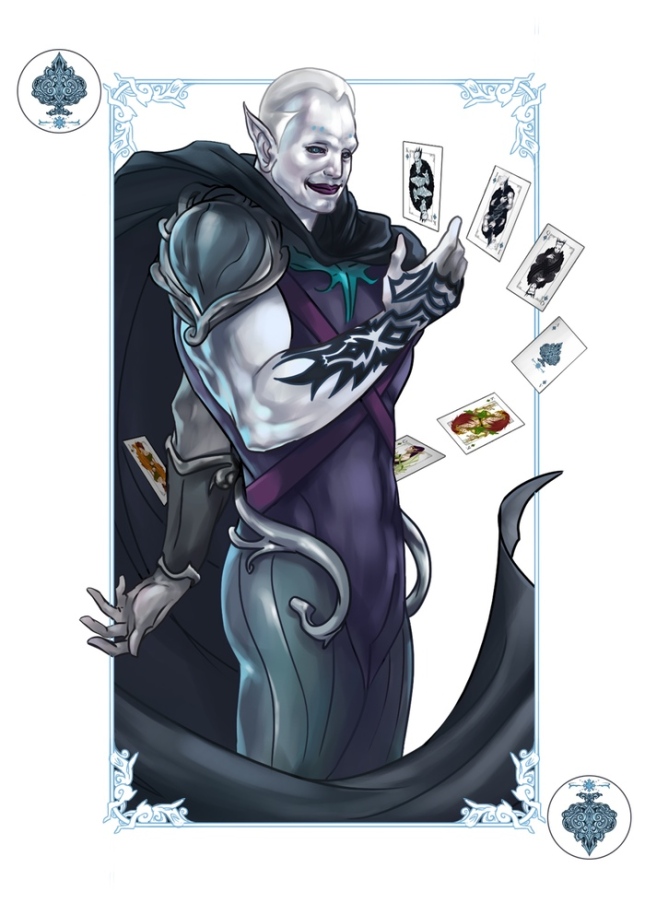 The back design is composed with various elements of trees and symbols of different climates typical for appropriate seasons. In the central part of the back, there is some kind of flipped tree of life which is a common motif in various world theologies, mythologies, and philosophies. Two special symmetrical elements of design put in the middle of upper and bottom edges of the back. They combine shapes of all four pips from a classic Anglo-French deck. 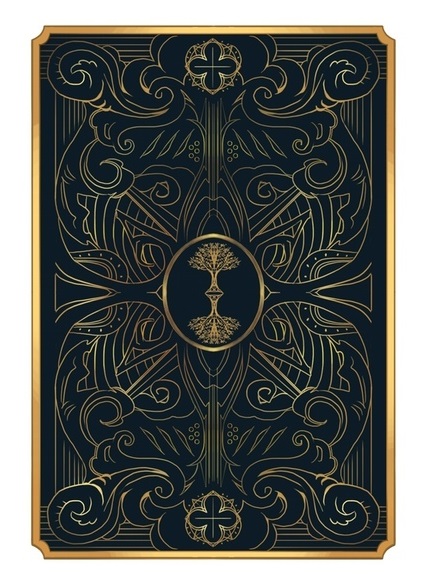 * William Browne (c. 1590 – c. 1645) was an English pastoral poet (pastoral poetry has to do with the simplicity of life in the country; it elevates the life of the shepherd or shepherdess, versus the evils of the city), born at Tavistock, Devon, England.

* John Clare (13 July 1793 – 20 May 1864) was an English poet who came to be known for his celebratory representations of the English countryside.

Posted by Collector on 07.05.2015 in Expert Playing Card Company, Kickstarter