“I started this series because I wanted to pay true homage to the musicians that have inspired movements, modified cultures and made music history. “Once I started the paintings, the concept of the combination of playing card designs with the likeness of each artist made more sense. The musicians I chose to paint have already been deemed icons. I just married those icons with the existing iconography of the modern day playing card.” ~ © 2007 Sydney James

I can confidently recognize only several persons. You can help with your comments.

The King of Hearts – Elvis Presley

Elvis Aaron Presley was an American singer, musician and actor – one of the most significant cultural icons of the 20th century.

The King of Clubs 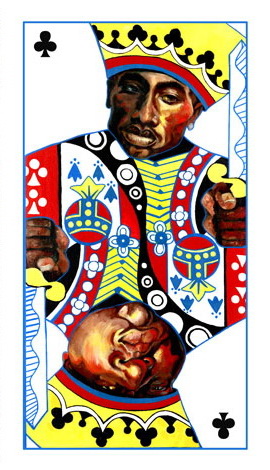 The King of Diamonds – Michael Jackson

Michael Joseph Jackson was an American singer-songwriter, dancer and entrepreneur.

The Queen of Spades – Elton John

The Queen of Clubs – Madonna

The Queen of Diamonds 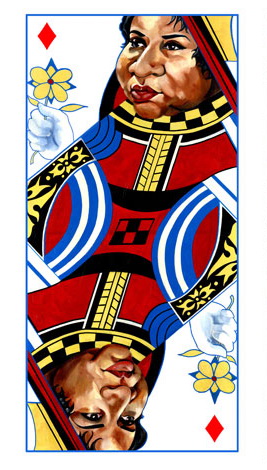