Playing Card Art: The King of Hearts by Ralph Sevelius

This artwork was created by an American artist, Ralph Sevelius. The King of Hearts was a piece done for Buckhead Church in Atlanta for Easter (2008). They were gathering artworks that displayed Jesus Christ in a creative way.  His starting point for the work was the phrase proposed by the church, “Christ built his ministry on selfless love and acceptance“.

Ralph incorporated several Christianity symbols into the overcoat of the King of Hearts.

Christian cross as a Christian symbol or “seal” came into use at least as early as the second century. It was regarded as a talisman against the powers of demons. Later the cross had become closely associated with Christ.

A symbol consisting of two intersecting arcs that resemble the profile of a fish is the ichthys or ichthus. It’s Greek “ΙΧΘΥΣ” which is an acronym for “Ίησοῦς Χριστός, Θεοῦ Υἱός, Σωτήρ” (translates into English as “Jesus Christ, Son of God, Saviour”). It was used by early Christians as a secret Christian symbol. Today it is also called the “sign of the fish” or the “Jesus fish”.

“XP” monogram is formed by superimposing the first two (capital) letters chi and rho of the Greek word “ΧΡΙΣΤΟΣ” which means Christ. The Chi Rho is one of the earliest forms of christogram (a monogram or combination of letters that forms an abbreviation for the name of Jesus Christ).

Ezekiel 36:26
“I will give you a new heart and put a new spirit in you; I will remove from you your heart of stone and give you a heart of flesh.”

The King of Hearts – Jesus Christ 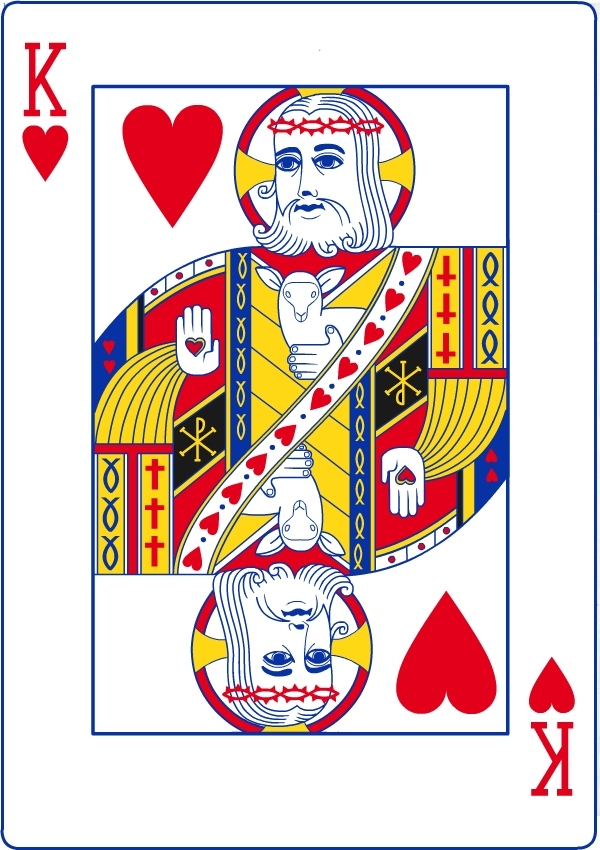