END_OF_DOCUMENT_TOKEN_TO_BE_REPLACED

Posted by Collector on 29.07.2013 in Behance, Typographic Playing Cards

END_OF_DOCUMENT_TOKEN_TO_BE_REPLACED

“Kickstarter: The Type Deck by Chris Cavill” is updated

“Kickstarter: The Type Deck by Chris Cavill” is updated.

P22 Type Foundry creates computer typefaces inspired by art and history and is renowned for its work with museums and foundations to ensure the development of accurate historical typefaces that are fully relevant for today’s computer user.

This is the second typographic deck by P22 Type Foundry. The company held a contest in 2008 to collect different designs from different artists for this deck. A panel of well-respected typophiles chose one card for each of the 52 cards and jokers. The artists had to meet the following main requirements:

pictures of the box are clickable

END_OF_DOCUMENT_TOKEN_TO_BE_REPLACED

This project consists of the creation of a typographic playing cards based on a typeface given to the student by lottery. The student selects the theme, motif and approach to create an attractive design made of type ONLY. They are not allowed to use shapes, illustrations or any other element that is not typographic.

These are typographic playing cards based on the TV series “Supernatrual”. Sara (US) wanted her cards to feel creepy with religious undertones. Each suit’s colours were chosen based on the four categories of creatures that are featured in Supernatural: monsters (green and red), demons (red and purple), spirits (purple and blue), and angels (blue and gold). Typeface: Caslon Pro.

Supernatural is an American supernatural drama television series created by Eric Kripke (first broadcast on September 13, 2005). The series follows two brothers as they hunt demons, ghosts, monsters and other figures of the supernatural. It is produced by Warner Bros. Television (in association with Wonderland Sound and Vision).

END_OF_DOCUMENT_TOKEN_TO_BE_REPLACED

This deck designed by Chris Cavill to bring something different to the table. It can be the first deck in Typographic category which will be printed by USPCC in case of its successful funding on Kickstarter. Typographic decks in many cases are playing cards with pictures on them composed of letters and numbers of a specific font. These playing cards slightly differentiate this approach as they have letters combined in names of cards as artworks. Different fonts are used. Chris invented a nice idea for his court cards to keep them fitting the theme. I think it is still can be classified as a typographic deck. 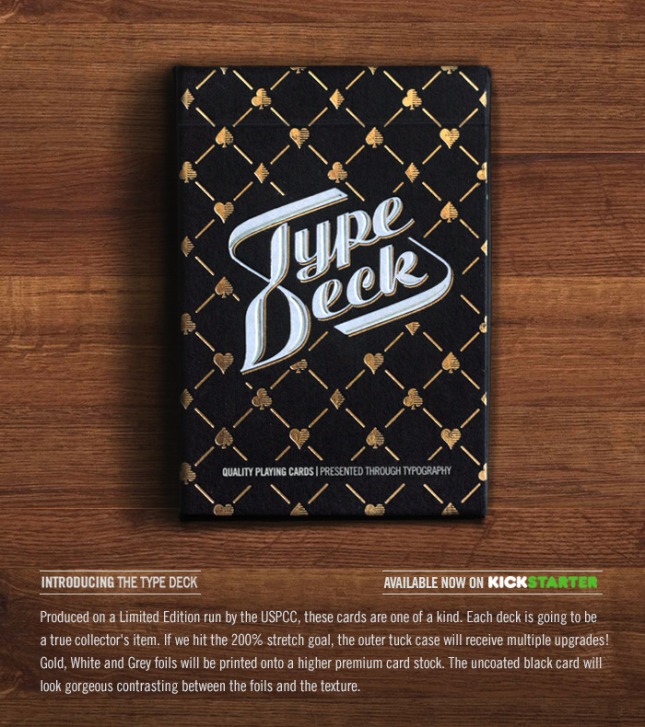 END_OF_DOCUMENT_TOKEN_TO_BE_REPLACED

Posted by Collector on 24.06.2013 in Kickstarter, Typographic Playing Cards, USPCC

A collaborated 54 deck of playing cards. Each individual card has a unique image created by the number or letter (face cards) of the card. The unifying theme is the Helvetica font used as the base of each design along with other shapes, fonts, or other design elements. Faces of cards designed by Junli Kato. Box and back-side of the cards designed by Peter Gutierrez. Box and cards all hand-crafted and assembled. 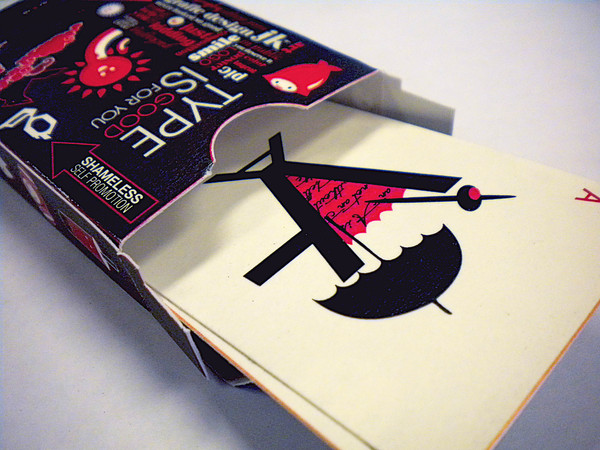