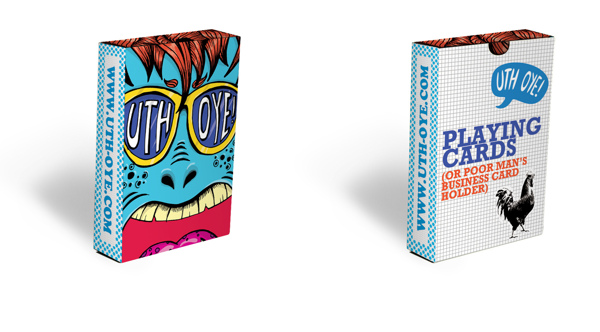 “A limited edition pack of playing cards featuring the Uth Oye! portfolio was given out at the launch of the brand’s flagship store in Lahore. Each card contains a unique Uth Oye! artwork that was used for the brand’s collection of t-shirts, accesories, shoes, as well as for the murals in the retail outlet.” ~ Shehzil Malik
END_OF_DOCUMENT_TOKEN_TO_BE_REPLACED

END_OF_DOCUMENT_TOKEN_TO_BE_REPLACED

“The Allure playing card deck is a design that is elegant and mysterious at the same time. We have put together a deck with not only the collector in mind but also the Cardist, Magician and the everyday card player.

These cards will be printed at the highest quality by one of the most respected playing card companies in the world. The Unites States Playing Card Company will print these cards on Performance Finish. The look and feel of our decks will be one of a kind I’m excited to be able to print this decks at with this exceptional quality and I know all of you will love it.” ~ Noel Quiles (TPX Designs)

END_OF_DOCUMENT_TOKEN_TO_BE_REPLACED

Posted by Collector on 17.03.2013 in Deck of Playing Cards, Kickstarter, USPCC