Howard Phillips Lovecraft (1890 – 1937) was an American author of horror, fantasy, poetry and science fiction, especially the subgenre known as weird fiction. Lovecraft is the originator of the Cthulhu Mythos story cycle which created a new shared fictional universe (a fictional universe to which more than one writer contributes).

The Society also produces a number of Cthulhu Mythos films and sound recordings under its Mythoscope and Mythophone labels. Additionally HPLHS produces different merchandise based on the Cthulhu Mythos theme including the deck of playing cards. 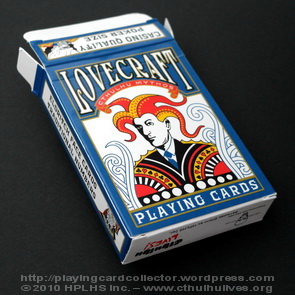 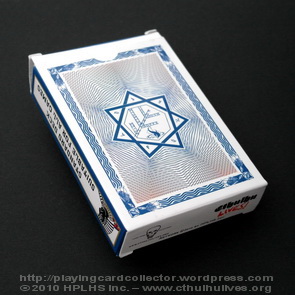 Their illustrator Darrell Tutchton and graphic designer Andrew Leman teamed together to created a fabulous deck of Lovecraftian playing cards. The poker deck consists of 52 playing cards and two Jokers. Court cards depict Cthulhu, Shub Niggurath and Nyarlathotep. The Ace of Spades has the Elder Sign and HPLHS’s motto – Ludo Fore Putavimus (“We thought it would be fun”). The Elder Sign is also depicted on backs of playing cards. H. P. Lovecraft himself is the joker. The deck is printed on casino cardboard with glossy finish. 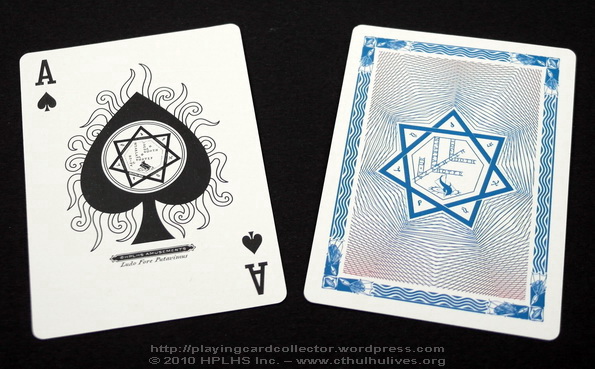 The Elder Sign was first mentioned in Lovecraft’s The Dream Quest of Unknown Kadath (1926). Lovecraft described it only once in his “The Shadow Over Innsmouth” (1936). The author is known to have drawn the Elder Sign in at least one of his correspondences (in a 1930 letter to another American writer Clark Ashton Smith) as a single line with five shorter lines branching off.

As the Cthulhu Mythos is a shared fictional universe each contributor has his right to see the Elder Sign in its own way. There are three versions of this sign.

August Derleth wrote several Cthulhu Mythos stories. He described the Elder Sign as a warped five-pointed star with a flaming pillar (or eye) in the centre in his novel The Lurker at the Threshold (1945). This description has become the most well-known and popular version of the Elder Sign.

HPLHS used the third variant of the Elder Sign. It appeared in Lin Carter’s short story “The Horror in the Gallery” (1976) and in some way combines two other variants. 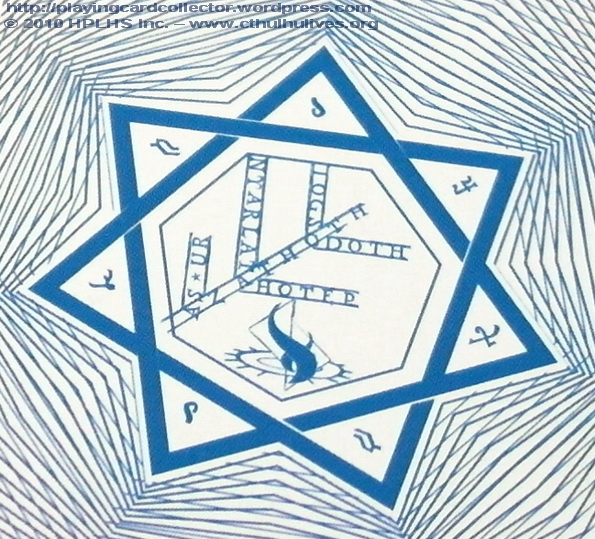 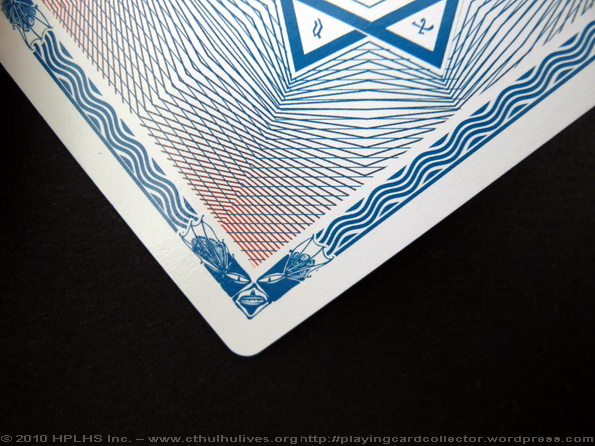 Cthulhu is a central figure in Lovecraft literature. A fictional cosmic entity who first appeared in the Lovecraft‘s short story “The Call of Cthulhu” and was described by  Lovecraft as “A monster of vaguely anthropoid outline, but with an octopus-like head whose face was a mass of feelers, a scaly, rubbery-looking body, prodigious claws on hind and fore feet, and long, narrow wings behind.” 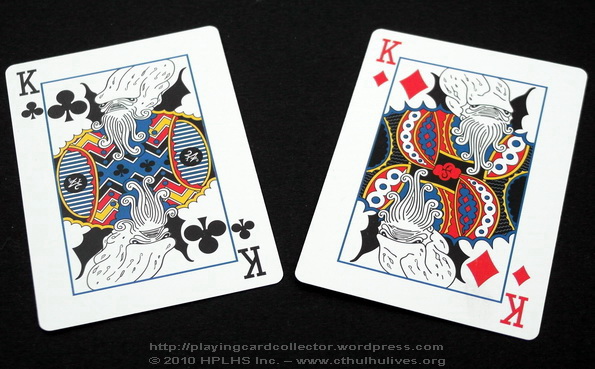 Shub-Niggurath is often associated with the phrase “The Black Goat of the Woods with a Thousand Young” and is a deity in the Cthulhu Mythos. She was firstly mentioned in Lovecraft’s revision story “The Last Test” (1928). Shub-Niggurath  was never actually described in Lovecraft’s fiction. But she is frequently mentioned or called upon in incantations. Most of her development as a literary figure was carried out by other Mythos authors. 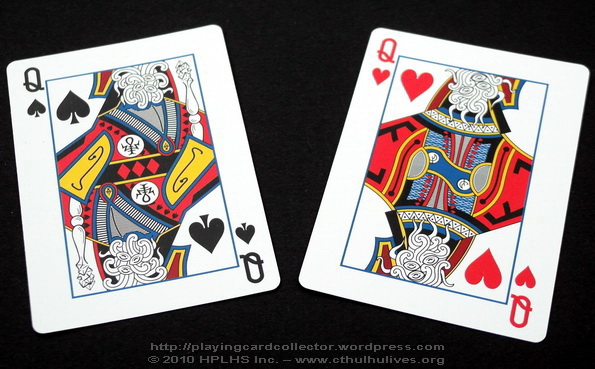 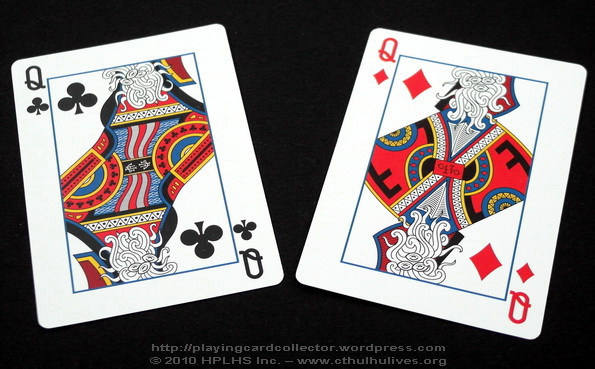 Nyarlathotep is a name used for various characters (and all Jacks are different in this deck) in the works of H. P. Lovecraft and other Mythos writers. The character is commonly known in association with his role as a malign deity in the Cthulhu Mythos. Nyarlathotep was firstly mentioned in Lovecraft’s prose poetry “Nyarlathotep” (1920). He is described as a “tall, swarthy man” who resembles an ancient Egyptian pharaoh. Later writers describe him as one of the Outer Gods. 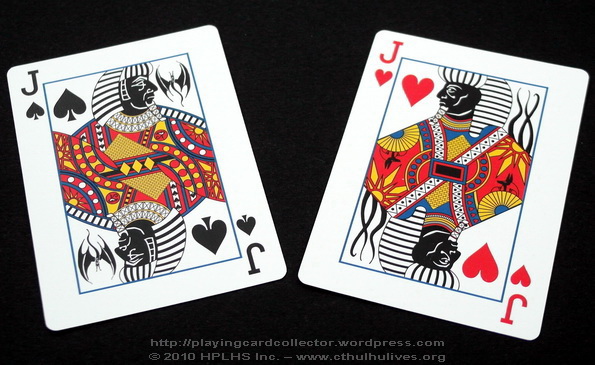 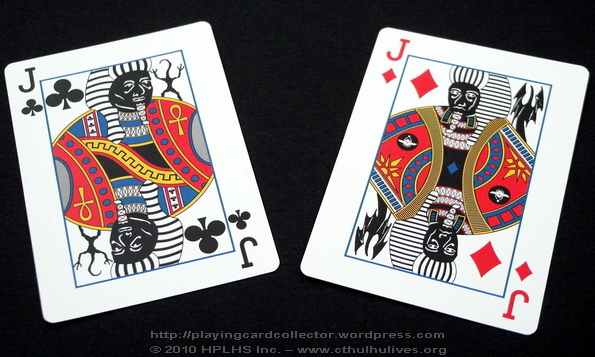 All number cards are quite traditional.

H. P. Lovecraft is depicted on both Jokers. 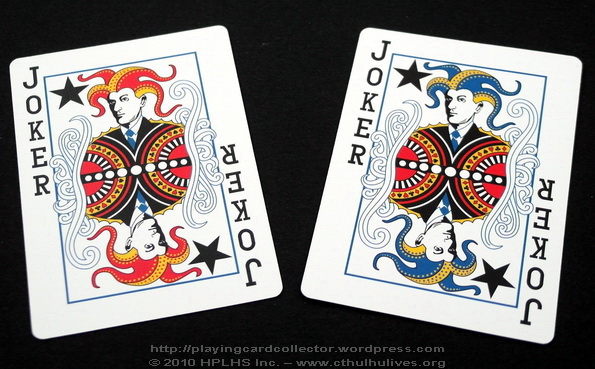