The Ace of Death & The King of Death 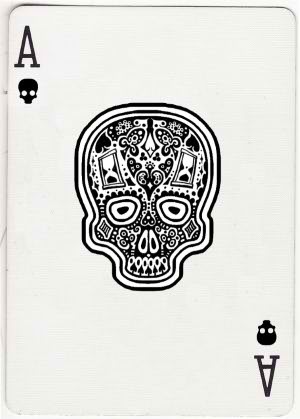 “MOMENTO MORI” on the Queen card translates from Latin into English as “remember (that you have) to die“.

Jack’s medallion also has its special inscription “VANITAS”. The Latin word means “vanity” and loosely translated corresponds to the meaninglessness of earthly life and the transient nature of all earthly goods and pursuits. Also a genre of Baroque painting has Vanitas name. It is represented by still life compositions with a human skull as the central element of them. Such artworks should remind of the transience of life, the futility of pleasure and the inevitability of death.

The Queen of Death & The Jack of Death

Other Peter’s playing card artworks are dedicated to different animals as royals on court cards. Their vivid and childish style contrasts with “death” cards.

Animal Kingdom: The King of Clubs & The Queen of Hearts

Animal Kingdom: The Jack of Diamonds