Digital Art Masters is the project originally launched by 3DTotal in 2005. The main idea was to create a catalogue-tutorial dedicated to 2D and 3D artworks. It should showcase the work of some of the finest 2D and 3D artists from around the world collected during a particular year. As a result the project turned into the series of such annual catalogues.

3DTotal itself was founded in 1999 as a simple 3D resource website. Over the last decade the site has evolved into one of the premier CG art websites in the world, offering a variety of training products, an inspirational gallery, a free texture library and hundreds of free tutorials on a variety of subjects.

Digital Art Masters: Volume 6 welcomes another 50 up-and-coming and veteran artists and follows the tradition of taking readers beyond the breathtaking images with detailed breakdowns of the techniques and tricks each artist employed while creating their stunning imagery.

But 3DTotal decided to make something special for this volume of Digital Art Masters. They produced a pack of limited edition playing cards to celebrate this volume (a free addition to the volume). Playing cards have appropriate artworks from Digital Art Masters: Volume 6 on them. So the deck can be counted #1 in the series as 3DTotal went on with supplemental playing cards. Three decks have been produced (for Volume 6, 7, 8). Some of them were available for purchase separately from the books.

This article is dedicated to the deck #1 (Volume 6). The deck: 52 playing cards with different artworks + 1 Joker + 1 information card. Bridge size. Playing cards were printed on quite soft cardboard and have a glossy finish. 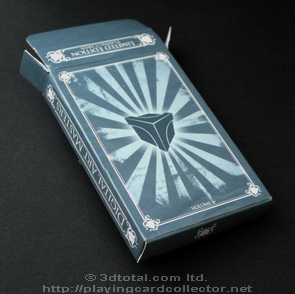 END_OF_DOCUMENT_TOKEN_TO_BE_REPLACED

This playing card project was organised by Jacqui Stuart (via Facebook page) as part of the Design with Purpose community. It was created for charity with all the profits going to the non profit organisation called Forest & Bird (New Zealand). Jacqui participated as the manager of this project and as an artist. Different designers, illustrators and artists from many different places around New Zealand and the word took part in this project. All their artworks were incorporated in the deck of playing cards produced in 2012 – Design with Purpose Playing Cards.

Forest & Bird is New Zealand’s longest-serving conservation organisation, formed in 1923 (they celebrate 90 years in 2013) in response to widespread extinction of native species and destruction of native forests. Since then their role has grown to include protection of all native flora and fauna on land and in oceans (New Zealand’s territory covers an area of ocean many times greater than their land mass), lakes and rivers of New Zealand. Forest & Bird has played an active role in preserving New Zealand’s environment and native species. They have helped establish protection for a third of their country’s land in parks and reserves, put an end to logging of their native forests and helped bring species such as the kakapo and kokako back from the brink of extinction.

The deck: 52 playing cards with different artworks + 2 different Jokers + 1 insert. Playing cards are printed by GEON (New Zealand) on cardboard and have a smooth finish (the same about the tuck case). The internal space of the tuck case hasn’t enough height so there are some problems with putting cards in the tuck case and pulling them out it. Due to that the isert for this deck isn’t in the tuck case. It is attached to the box in simple but creative way – see the picture.

END_OF_DOCUMENT_TOKEN_TO_BE_REPLACED

Custom52.com is a Canadian site representing an online design community using playing cards as the canvas. People use compact format of playing cards to showcase many artworks in one deck which is still convenient and functional. All artworks featured on the cards are entered by individual artists. The artwork is voted on and chosen by members of the community (the membership is free). Each deck of cards is referred to as a Cycle. The Cycle closes when enough designs are submitted. After that the public vote begins and the chosen design for each playing card goes to print.

This post is dedicated to the second deck produced by Custom52.com in 2008 – Cycle II Deck.

The deck: 52 different playing cards + 2 different Jokers + Information card. Bridge size. Playing cards are printed on quite soft cardboard and have a glossy finish (as well as the tuck case).

pictures of the tuck case are clickable

END_OF_DOCUMENT_TOKEN_TO_BE_REPLACED

Gigposters.com is a Canadian site dedicated to the artists, designers and musicians who create gig posters to advertise shows and events. It is some kind of international community for these categories of people. They are concentrated on music events. You can submit your works and take part in the community for free. Gig Posters accepts gig poster, flyers and handbills. They do not accept promotional, non-music related posters or posters for shows that did not happen. There must be at least one musical performer listed on the poster. (a band or DJ).

From time to time Gig Posters selects some artworks and produces a deck of playing cards. There are three decks at this moment. And this article is dedicated to the first one which was printed in 2005 (two other decks will be described on pages of this blog as well) – Gig Poster Playing Card Deck 1.

The tuck case is clickable 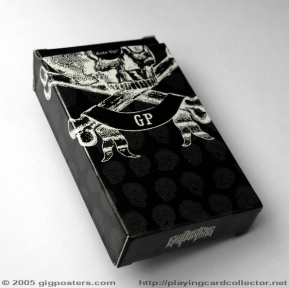 END_OF_DOCUMENT_TOKEN_TO_BE_REPLACED

Founded in 1996 by one of Scandinavia’s leading off-line casino operators, Net Entertainment was one of the pioneers in online gambling. The company is a premium supplier of digitally distributed gaming systems used by some of the world’s most successful and prominent online gaming operators. It includes a wide range of high quality games, based on the latest technology and a platform for casino operation and management.

pictures of the tuck case are clickable 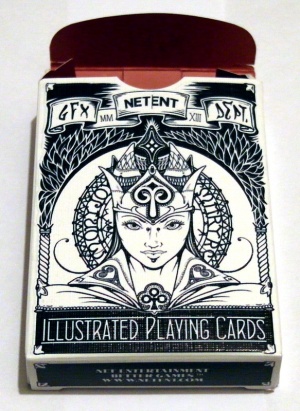 END_OF_DOCUMENT_TOKEN_TO_BE_REPLACED

Chicago playing cards designed by the Double Blind Collective.They redesigned a traditional deck of playing cards to focus various Chicago landmarks, personalities and historical events. The cards focus on the unique aspects of the city rather than just the John Hancock or Sears Tower.

The deck are currently sold out. They might possibly do a reorder sometime in the future.

END_OF_DOCUMENT_TOKEN_TO_BE_REPLACED

As I said in one of my previous posts Zeixs organizes artists from different parts of the world for creating a deck of playing cards as a collective art project (CAP). Artists submit their artworks to Zeixs and Zeixs selects final artworks among them for their deck.

Zeixs is working on their third deck of playing cards now (read about their second deck). And they are interested in collaboration with artists. You can contact them.

Good luck, provide them with regards from this blog.