Bicycle Instruments of War Deck is designed by Jacob Bear and Bear Claw Studios. The deck dedicated to comics figures. 56 different cards – even number cards have artworks. It’s planned to be printed by the USPCC.

END_OF_DOCUMENT_TOKEN_TO_BE_REPLACED

A Mexican artist, Anya Uribe (AnyaUribe), decided to play with a superheroine from DC Comics Univers, Catwoman. She created different appearances for her, and depicted them on a set of playing cards. These are only artworks… creative and funny artworks 🙂

Catwoman is a fictional character from DC Comics Univers. She is nominally a supervillainess, known for having a complex love-hate relationship with Batman. The character was created by Bob Kane and Bill Finger, partially inspired by Kane’s cousin, Ruth Steel, as well as actress Jean Harlow.

END_OF_DOCUMENT_TOKEN_TO_BE_REPLACED

Fullmetal Alchemist is a Japanese manga*** series written and illustrated by Hiromu Arakawa. The world of Fullmetal Alchemist is styled after the European Industrial Revolution. Set in a fictional universe in which alchemy is one of the most advanced scientific techniques, the story follows the brothers Edward and Alphonse Elric, who are searching for a Philosopher’s Stone to restore their bodies after a disastrous failed attempt to bring their mother back to life through alchemy. It was adapted into an animated television series and films.

I surmise that these playing cards were designed by “0nly Y0u” (on the basis of artworks of Hiromu Arakawa ?).

END_OF_DOCUMENT_TOKEN_TO_BE_REPLACED

I don’t have any official information about the cartoonist. But in accordance with rumors the artist can be Bill Wenzel (a cartoonist best known as a widely published GGA*** artist for men’s magazines). 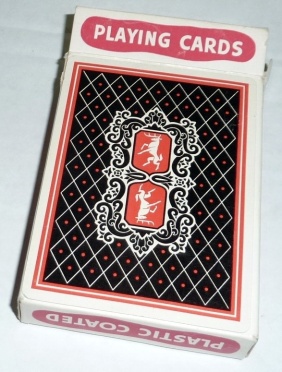 END_OF_DOCUMENT_TOKEN_TO_BE_REPLACED

Playing cards produced by TheTopCowStore.com. Unjustified very high prices. Spades, Hearts, Clubs, and Diamonds have the same pictures on cards. I don’t have information about different backs and editions.