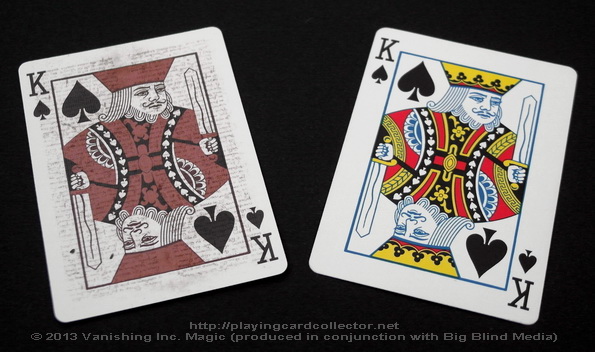 Woodcut is a relief printing artistic technique in printmaking in which an image is carved into the surface of a block of wood. Printing parts remain on the appropriate surface while the non-printing parts are removed. The surface is covered with ink by rolling over it with an ink-covered roller. Multiple colours can be printed by keying the paper to a frame around the woodblocks. In this case a different block is used for each colour.

Back design of these playing cards probably imitates the inside of the book cover and is noticeably one way. I guess the book happened to be in possession of some curious magician who couldn’t get over the first page of it ;). I almost can see his thumbprint on the left bottom corner of the “cover”.

On the other hand it can be the front of the book cover as such “enhanced” corners of book covers were popular that time.

Other decks by Big Blind Media:

One response to “USPCC: Discoverie Deck by Vanishing Inc. Magic and BBM”