This deck could be better without this USPCC’s seal or with a custom one made as a bookmark sticking up from the middle of the book and pressed to the back of its cover.

The backgrounds of all playing cards have some calligraphic text. Perfectionism of the producers has its limits as the text on all backgrounds is the same (see tens and the Queen of Spades below). It is probably a page from the book. On the other hand the book was written in archaic Early Modern English and I doubt a lot of people will enjoy such reading :). Also the text is almost unreadable because of its small print. This text turns all playing cards into symbolic pages of this book. Stylish.

One interesting and funny detail – the text on all backgrounds happened to be flipped (I have to think so).

Aces develop the creative idea of pages from the book. Sam divided a part of one sentence between all four aces. So you should flip four aces (♠ – ♥ – ♣ – ♦) – four pages of the book – to read a wise advice “If you plaie among strangers, beware of him that seemes simple or drunken”.

This is an incomplete phrase from the 27th Chapter of the book called “of cards, with good cautions how to avoid cousenage therein: speciall rules to conveie and handle the cards, and the manner and order how to accomplish all difficult and strange things wrought with cards”. In this chapter, inter alia, Scot reasons how gamblers and dice players should avoid cheaters. The whole phrase (in modern English) is the following “If you play among strangers beware of anyone who seems simpleminded, or drunk, for when you think to take advantage of them, perhaps encouraged by their confederates who you take for your friends, you your self will be the one taken”. 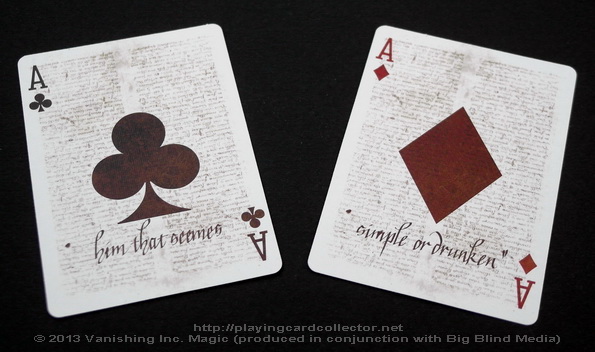 As you can see indices and pips are of the same size and form as on Bicycle standard playing cards. While big “black” pips on aces are slightly scratched (by the way scratches are directly from backs of the cards) dark brown ones, small “black” pips on other cards are some mixture of orange, brown, black and grey colours. “Red” pips are some mixture of orange, red and brown colours – they are scratched the same way.

The playing cards of each suit numbered two and four have smaller woodcuts on them (there is the same picture from one of the Jokers on cards numbered two). On the cards numbered four you can see the illustration for Scot’s explanation of tricks with knives pinking a hand or cutting other parts of a body.

This is more European tradition for collectable playing cards than American (USPCC’s) one. So this underlines that the deck is dedicated to the European prominent book. 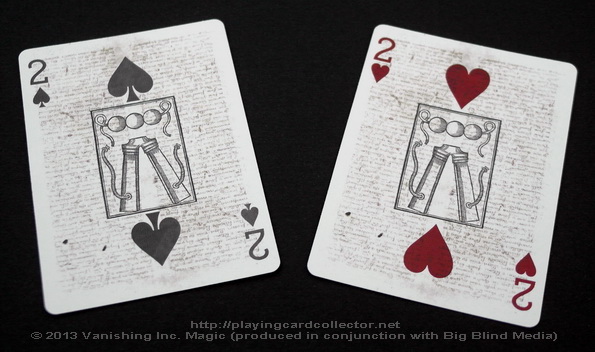 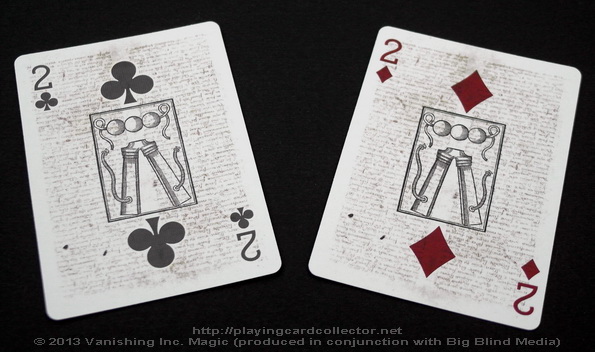 One response to “USPCC: Discoverie Deck by Vanishing Inc. Magic and BBM”