The Launching of Bicycle Venexiana Playing Cards has to be Postponed

The launching of Bicycle Venexiana Playing Cards on Kickstarter has to be postponed to July 16 (today) evening at 5:00 EST. Be sure to find the link to the project on this page.

This is a set of illustrated playing cards that display various studies the KHLim offers. Designed by the Dutch artist – © 2012 Nancy Schokkenbroek

KHLim – Limburg Catholic University College – a member of the University of Leuven association, the university network of Leuven University and twelve university colleges in Flanders, reaching from the Dutch border to the North Sea.

END_OF_DOCUMENT_TOKEN_TO_BE_REPLACED

Posted by Collector on 16.07.2013 in Playing Card Art, The King of Hearts, The Queen of Hearts

Important Information for Artists and Designers

Dear artists and designers, you could notice the special banner in the right upper corner of the sidebar regarding playing card art requests. It was connected with the art request of Zeixs.

Now I am happy to announce that it is and will be connected with a special page dedicated to playing card art requests of different companies, organizations and independent projects. I hope it will be useful for both parts of such collaborations.

END_OF_DOCUMENT_TOKEN_TO_BE_REPLACED

Nintendo Co., Ltd. is a Japanese multinational consumer electronics company and one of the world’s largest video game companies. Originally it was founded as a card company in late 1889.

These characters are from the Donkey Kong series of arcade games developed by Nintendo. The first arcade game was created by Shigeru Miyamoto and released in 1981. 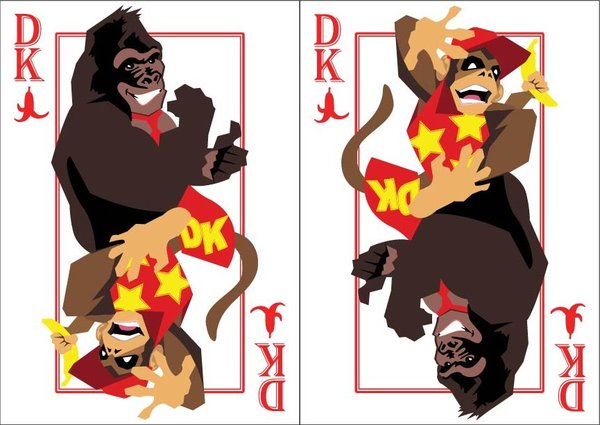