Stranger & Stranger is an award winning packaging design and branding company specialising in alcoholic drinks. Since 1994 they have named, researched and registered wines and spirits brands worldwide. They have created bespoke and innovative bottle shapes, labels, closures and all secondary packaging.

To celebrate the year they broke out of their alcohol comfort zone and designed premium olive oils, fine foods, luxury luggage and other new stuff, they decided to create a deck of playing cards and a special set of such decks.

As a result of this collaboration, Ultimate Deck saw the light in 2013. The deck includes 54 different artworks. The main part of them makes the cards semi-transformation playing cards. The deck was printed by USPCC.

The whole tuck case is covered with glossy embossed black elegant design elements. The back part of the tuck case repeats the front part of it. 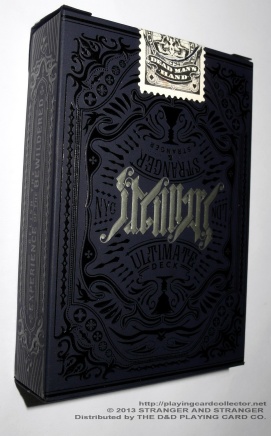 The traditional bowl (the symbol of Stranger & Stranger) formed with silhouettes of two human faces looking at each other is also on the tuck case.

The tuck case has a custom seal. It imitates some kind of an old stamp which was used to indicate an excise tax long time ago (when decks of playing cards were excisable). Inscriptions on the seal: “Stranger & Stranger”, “14”, “1994”, “Dead Man’s Hand”, “New York”, “London”.

Inscriptions on the flap of the tuck case: “Limited Release”, “Stranger and Stranger”, “Vintage Cut No. 14”.

There are “The Marvels of the Odd Minded Await” on one side of the tuck case and “Relish the Experience of the Bewildered” on the other one.

The bottom part of the tuck case is also full of designed elements. Inscriptions on it made with silver ink say “STRANGERANDSTRANGER.COM”, “Designed by Stranger & Stranger New York & London”, “Distributed by The D&D Playing Card Co. Hollywood, CA 90028”, “Made in USA”.

The whole tuck case is made of black paper so its internal part is also black. Only playing cards from the special double set of  them have gold edges (read and see more here).