One fine day Inkygoodness decided to organize the Beermat Character exhibition. They asked Ammo to share the gallery space for that purpose and Ammo gladly agreed to do that. Ammo wanted to add something original and a little different from their usual output to that joint exhibition. But they also wanted to be connected with their print based roots. The outcome is an illustrated collection of playing cards based on maritime/nautical theme and high quality art prints – The Poop Deck Project. A real deck of playing cards was printed as a part of this project.

The box artwork has been crafted by James Burlinson (aka Burlisaurus). The pirate character featured in the Poop Deck logo was drawn by Bart Aalbers, an Illustrator based in Rotterdam.

pictures of the box are clickable

The deck: 52 playing cards + 2 Jokers. Playing cards are printed on solid cardboard with a smooth matt finish. The quality of pictures on the cards is amazing and proves Ammo’s print based roots in the best way.

Tally-Ho Deck and The Poop Deck 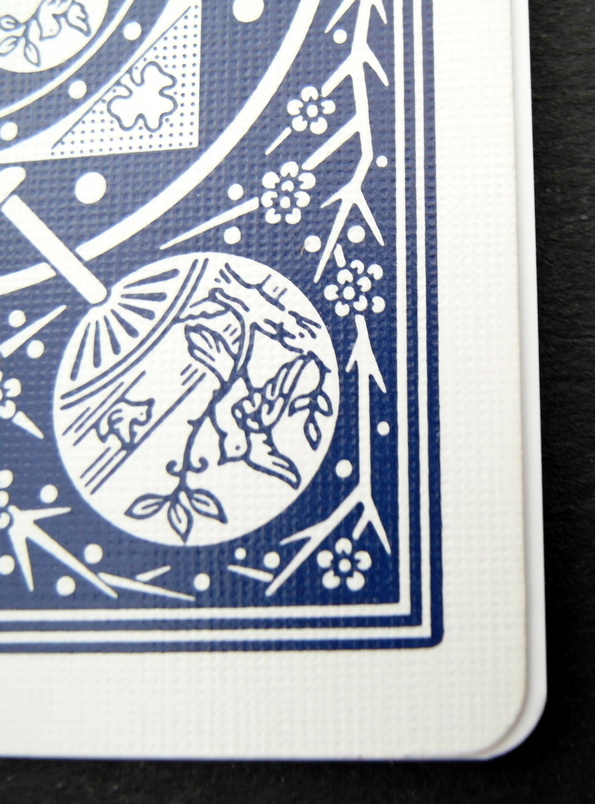 As it was said The Poop Deck is officially dedicated to maritime/nautical theme. In reality it has more from pirate theme as two suits are directly dedicated to pirates and two other suits are dedicated to people and creatures connected with pirates in some way. Ammo replaced traditional pips with their own pips. Savvy?Unfortunately two of them are the same despite the fact that they have different colours. Shiver me timbers! I think some kind of a “black spot” could be better for Spades (Cursed Pirate Crew).

“I received the Cursed Pirate Monkey character. My idea was to create zombie pirate monkey. The idea that zombies wander aimlessly & cannot die made me think of of a scenario where the zombie was cast adrift at sea, too stupid to paddle anywhere, aimlessly floating in the same way it would wander on dry land. Ammo set a nice challenge with the colour scheme for the suite as the purple doesn’t fit with the typical zombie or monkey character. In fact making a monkey look zombie like is hard in itself as most of my initial sketches looked like either a stupid or an angry monkey and I found that removing facial features to show the skull also removed the most monkey like features, which is why I went with the exposed brain, empty stare & typical stretched out arms.” ~ Colin Hood

“We are lonely and long for the day when we reach the shore…until then, we are trapped here to obey and endure the endless commands of the sea…each day gone by, with the thick and opaque air that has replaced our lifeless breath, We linger on with the our fading hope…sinking little by little like the this ship that we were on.” ~ Oat Montien

The pictures of the Three, Four, Five, Six, Seven and Eight of Spades aren’t suitable for persons under 16 years old. If you are 16 years old or older you can see them here [password: 16]

“The Powder Monkey was a teenage boy who used to go and collect more gunpowder for a ships artillery. They chose young boys because they were hidden from view due there height but it was still one of the most dangerous jobs in history. My character is one of the unlucky ones who got blown up but he’s happy enough as a zombie. I gave him some tattoos because sailors were never too young for tattoos.” ~ Russell Taysom

“My piece for the Poop Deck project is inspired by gang culture and traditional card characters. I wanted to take the symmetrical character design typical to playing cards and give it a weird cursed pirate gang twist, so I thought about the suit being a crew.

First off I created a graphical hard lined and clean looking cursed pirate, then directly sketched over the top of that in pencil to give it a hand drawn contrast. Hopefully it kind of ties in with the gang thing and gives it a vaguely ‘tagged’ or vandalised look too.” ~ Jordan Carter

“I was given the task of designing the Undead Helmsman. Before I began, I thought it’d be nice to introduce a narrative to the character, and come up with a humorous way in which he may have become deceased. Being a pirate, I thought a sword to the head would be an honourable way to go, but this pirate is a bit rubbish and while he did die from a sword to the head, it’s not the kind of sword you might expect…

As pirates often have bits of wood or metal hooks replacing lost limbs, I thought why not take this one step further. As the man behind the wheel so-to-speak, why not have the ship’s wheel replace some missing arms – forever fusing him to his role on board the Good Ship Poop Deck.” ~ Tim Smith

“Really enjoyed working on the cursed pirate character. Gave me the freedom to create a more evil rotting character and tried to be a bit more detailed than usual. It was kinda fun to imagine the character interact with more of its kind and also learned a few new tricks while creating it. Overall this was so much fun to create and hope never to cross paths with a fella like this, unless he wants a hug.” ~ Yema Yema

“I had lots of fun designing the Master Gunner character for the Cursed Pirate Crew, as creating dishevelled, dead eyed little critters is one of my enjoyments in life. As you can see, he’s definitely been through a few bloody conflicts in his time, and the pistol in his grasp is like his best friend. Or should I say…his ONLY friend – he spits in the face of camaraderie and makes tranquillity and peace walk the plank!” ~ Mark Wilkie

“Gerard Girard was not always a pirate, but he has always been a cook.

Girard was a contemptuous chef who owned a well-known bistro in a small French port town. Only a select few could take delight in his mouthwatering meals. For he never allowed the ordinary townsfolk to approach his establishment, let alone taste his culinary compositions. He thought them too simple and unworldly to fully fathom the complexities of his dishes.

Tired of his pompous and self-centered ways, the townsfolk threw him and his savory snacks out to sea. As he descended into the deep, dark drink, a sea witch, entranced by his edible eats, took pity and gave unto him immortal life. Expectedly, over the years Girard’s flesh and entrails rotted away. No longer able to mix with mortal men, Girard joined an unpalatable band of blighted buccaneers, predestined to prepare their provisions in perpetuity.” ~ Alexandra Beguez

“On a pirate ship, the Boatswain was responsible for maintaining the workings of the vessel, and also for dropping the anchor. This Boatswain’s curse keeps him bound for all eternity to his ship’s anchor, but his mortal flesh has long since been devoured by the creatures of the deep. Every night he dreams of his long gone days of plundering and looting on the high seas.” ~ Sam Ailey

As mentioned above, as a child I was terrified of zombies, mostly because of video games. Perhaps for this reason when I grew up I started to draw the muscles and bones that appear from beneath the torn skin, to exorcise my fears. or maybe I just get lost in the details. the cursed quartermaster, in any case, it seemed to me right at the beginning made especially for me.” ~ Luca Marcenaro

“Oops that’s right, who got a bit pickled last night!? The cursed Pirate Captain – that’s who. My Cursed Pirate Captain is not a zombie or a monster rather he is cursed due to his love of Rum. His love of the ol’strong stuff has seen him get into some terrible pickles. His latest one to actually become totally stuck inside the bottle like an old ruined galleon.

His stupefied parrot has just unearthed the treasure map and located the prize before the Captain’s very eyes! Shame he can’t do much about it…” ~ Miss Swanne

“The pirate Queen was cursed to eternal life by an old and wise medicine man from the south pacific because she had stolen the treasure of his tribe and turned his people into shrinking heads. Since then she restless haunts the seven seas and leaves only death and ruin wherever she puts her foot.” ~ Ebeneeza K