“My character is a Parrot from the pirates crew. Is the Ace. I love to draw animals, so I was really happy when I’ve noticed that my card was a Parrot.

I drew it in a realist way,for play with the vertical position of the parrot with the Pirates flag breaking it in oppositte sense. I thought as it must be a card too (so much small in size) the simplicity in the design could allow to have a clear view in the two ways, in printing and in a card.

I really enjoyed playing with the different layers of opacity for colouring my character.” ~ Sandra Escriche

“My Poop Deck character is Pirate Cabin Boy. I was inspired by memories of childhood, when we played to be pirates, building small cardboard swords and dreamed of far away islands. I focused on the sly expression and the safety of who know that one day will command the crew. I decided to use colors like for screen printing in order to keep the vintage effect of a playing card.” ~ Roberto Blefari 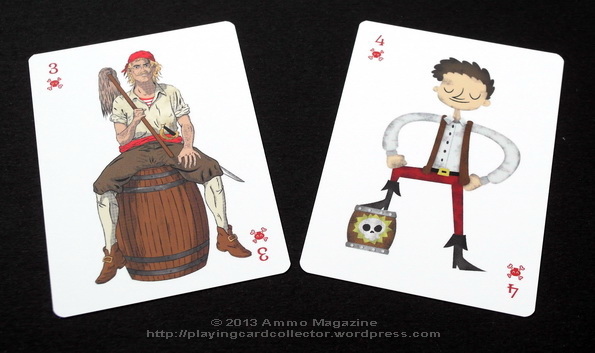 “I was given the character of a Pirate Swab/Swabbie which is a lowly pirate often found swabbing the deck with a mop. My inspiration for this piece came from the work of Jose Luis Salinas and his 1940’s comics in Hernan el Corsario. I admire the intricate line work and subtle halftone shadings of that era which is something I am developing in my own work.” ~ Max Lockwood

“This design is inspired by Somali pirates. Pirate Pilot doesn’t really have much to say and is awesome at his job.” ~ Kenard Pak

The picture of the Six of Hearts isn’t suitable for persons under 16 years old. If you are 16 years old or older you can see it here [password: 16]

“This is Dave, the ship’s carpenter and surgeon, after a bottle of good old rum sometimes he can mix his current task, but nothing that he can’t fix with a hammer and a nail or two…” ~ Roy Margaliot 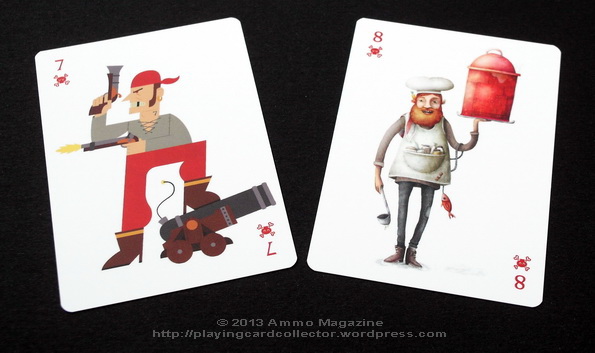 “The Master Gunner, commander of all things that go boom! Whether ye want to take out an enemy ship from 200 yards, or deliver some dog a gutshot as you stare at him eye-to-patch, he’s the man ye’ll be wanting to talk to.” ~ Rob Barrett

“My assignment was to make an character for ‘Pirate Crew’, the Pirate Cook. On a pirate ship the Cook prepares the food for the crew. Sometimes the Cook would also double as the ships surgeon.

I decided to design a Pirate character with a beard, an earring (little reference to the cliche pirate), lots of cooking accessories and some small hints of his surgeon skills (the band aid on his apron and the injection needles between the herb collection. I wanted to give him a proud look while serving the enormous pan of hot food for the hardworking and hungry crew. To make everyone understand how high the level of happiness was around dinnertime.” ~ Lea Vervoort

“The Pirate Boatswain. Often called the Bosun or bos’n it is the term given to the foreman of the ships crew. From the Old Norse word sveinn meaning servant, they are completely dedicated to the running of the ship and are in charge of the anchor, sails and rigging.” ~ Joe Todd Stanton

“Rudegar Norris is the treasure-hungriest Pirate Quartermaster around! His rampant desire for anything shiny has led him around the world 3 and a half times and he once popped a man’s eyes out of their sockets to get at his pile of gold (later confirmed to be some mustard). Finding parrots to be obnoxious and flighty he adopted a pet shoulder-rat, who he named Old Yeast. He wears a little bandana, which all the other pirates agree is adorable.” ~ James Stayte 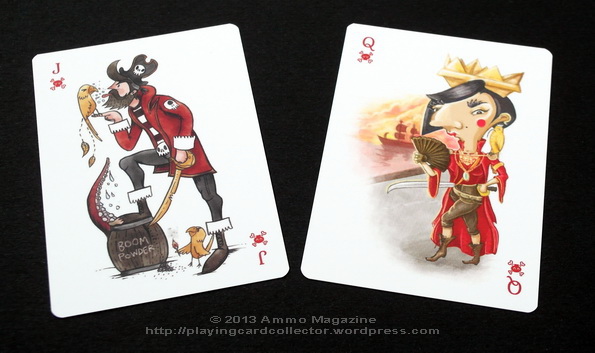 The Jack of Hearts – Will Aslett: Site ♠ Twitter ♥ Tumblr ♣

“My Pirate Queen character was largely inspired by Ching Shih, a prominent female pirate in the early 1800’s. Researching her made me want to draw a really strong female character that looked a little bit mad and epitomised all of the traits that Ching Shih seemed to possess: intelligence, cunning, strength and ferocity. My illustration started with a strong pencil drawing and then was painted digitally with a emphasis on red and gold to bring in some traditional Chinese colours.” ~ Bryony Crane

“For my character, the Pirate King I began looking up some information on pirates from the 18th century. What did they wear, what weapons did they use, and so forth. From there on I tried to combine whatever I thought would look good. The result is a though, but level headed, pirate leader. Armed to the teeth and ready for whatever the seven seas, or his crew, can throw at him.” ~ Menze Kwint