“I was very excited to find out that I was illustrating an ace card; even more so when it was to be a lucky cat! (See previous statement re: cute animals.)

Naval ships would carry a cat for luck so I felt he had to look important, which is why I have him standing up on his hind legs. I also thought he should look like a member of the crew. How could I resist drawing a cat in an old navy uniform?

I’m really pleased with how my lucky cat has turned out, especially the shading of his jacket. It’s probably one of my favourite illustrations I’ve ever done!” ~ Julia Broughton

“My Poop Deck character name is Harbor and he is part of the Royal Navy suit.

He is a ship’s boy of the new generation. He listens to punk rock music and he’s saving money to buy a kickass guitar.

I thought it would be fun to imagine what a ship’s boy would be like these days: a young and skinny lad listening to his ipod while mopping the deck. In order to be a 21th century fella, I also gave him an emo fringe and a pair of All Stars.” ~ Laura Wood

“I was given the Landsmen to illustrate. He’s unskilled having only been at sea for 1-2 years and doesn’t even wear a proper uniform; he’s basically the intern! SO with this in mind I created a young and eager, fresh-faced character with mop and bucket in hand. He’s ready and waiting to get stuck in and make himself as useful as possible on the Poop Deck.” ~ Darren Turner 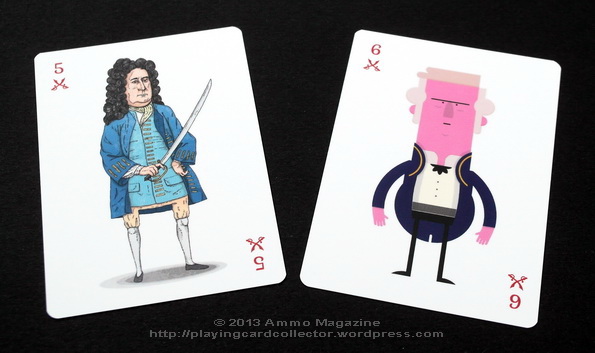 “William H. Bagshaw is a Royal Navy Armorer you wouldn’t want to mess with. Don’t be fooled by the wig, underneath that is a mean skin head waiting to attack. He likes the finer things in life but isn’t afraid to roll his sleeves up and start swinging his deadly sword.” ~ Ian Carrington

“The character of the Master Gunner was built around a stern expression and regulation Royal Navy attire and topped off with the daintiest of hairdos.” ~ Linda Coulter 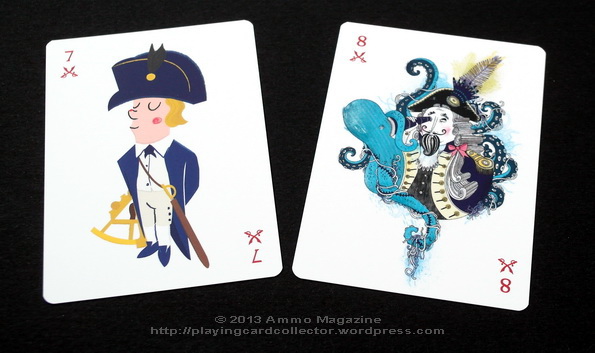 “Charles is a Redcoat Midshipman, he is a studious 16 year old and prone to getting massive zits on the end of his nose. His Daddy is very rich, which gives Charles illusions of grandeur, but truth be told he still gets sea sick, and he doesn’t much like any physical activity, though he does love wearing the uniform and getting to carry a sword (which he has no idea how to use).” ~ Samantha Eynon

“Ernest Higgins was a maritime man-marvel who travelled far and wide, leading his crew through many successful sea skirmishes. Despite his fearsome reputation he always took the welfare and morale of his men very seriously. Always on the look out he is surprised to see that there ain’t no ship in his view but an octopus coming to say Hello!” ~ Tilly 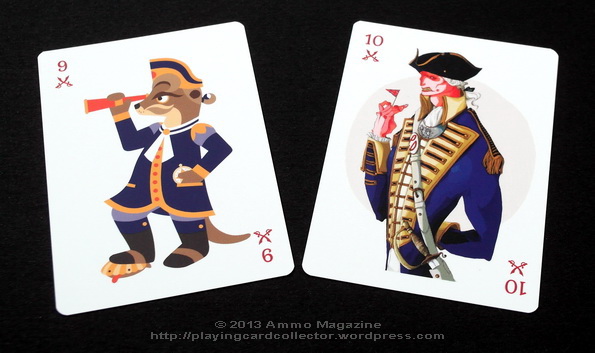 “Lieutenant Meerclam had always felt the calling of the sea. While holidaying on a nearby island with his family as a young meerkat he came across a clam shell that had washed up onto the shore. Inspecting it’s pattern and colours made fascinated him until suddenly the clam opened up and nipped at his fur! With a jump and a squeal he launched it back into the sea, unknowingly saving the clams life. From that day he decided to be the first in his family to travel the ocean seas and vowed never to let a clam get the better of him again.” ~ Sneaky Raccoon

“My card was the ‘Royal Navy Commander’. His name is Reginald Cooper, and on an average Tuesday he is found scowling and fussing over where his hat is and the state of his cuffs. He’s a high maintenance sort of man, but he does his job rather well.” ~ Cathy Kwan

“When I received my character of a Royal Navy officer, the first few things that popped into my head was good old Nelson himself and the fictional Horatio Hornblower, although the latter was probably just for the comical name. I am incredibly childish by the way. I wanted to express a character that while might be small in stature, he was mighty in his self belief shown through his swelled chest and fixed determined grimace. The extravagance of his hat and uniform shows that our officer might be a little pompous and serious, but I can still picture him, relaxing with a rum and his lady back at the sugar plantation after a voyage?of fighting pirates and other miscreants.” ~ Donough O’ Malley

“I had the chance to draw the Redcoat Admiral’s daughter. I had fun drawing her, especially her dress. To me, she had to have this arrogant attitude because her dad is important, powerful and rich. Her dress screams “I am better than you” and her jewels are shiny and huge. She doesn’t have to say a word; her appearance speaks for her. She’s proud of her daddy and wears a dress similar to redcoats’ uniform.” ~ Sibylline Meynet

“The Redcoat Admiral is an authoritative figure, a true commander of his fleet. He is one who is wise beyond his years and his hair – curls of inherited premature greyness – is his own. A hirsute man, he prides his beard of which he has spent many a dedicated year growing and grooming while a lifetime on the sea has rendered him the epitome of patience. In his early voyages his spotted handkerchief once wiped the remnants of seasickness from the corners of his mouth, but now it wipes the blood of enemies from his blade. With no known family, the sea is his home.” ~ Adam Cruft 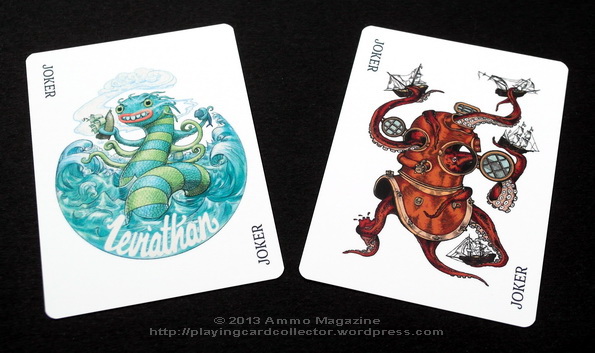 “The Leviathan is a Biblical sea creature of gargantuan proportions. A sea serpent said to breathe fire. Here it has been brought into the world of Slumber. A friendlier version who still looks fairly grumpy, revelling in his path of destruction.” ~ Slumber

“The piece I created for the Kraken was admittedly an oldie, but fitted so well within this project that it seemed wrong not to use it. The Kraken is an enormous mythical sea monster which used to devour ships. There is a noticeable altering of proportions in this Illustration to test the viewer.” ~ Max Lockwood

“I was super excited to be asked to design the packaging for the card deck (which would double-up as the back side of the cards). It was a daunting task. Knowing that I would be creating an image that needed to do justice to all the talent it would be housing (around 50 artists, that’s a whole lot of talent guys) put the willies up me but provided a ton of inspiration. I eventually settled on the idea of a treasure fight, a battle for the booty; staged upon the poop-deck itself between a hand-full of characters from the cards. Their desperation is a sign of just how great that Poop Deck is.” ~ James Burlinson